Keeping You Out of the Hospital After Discharge

In this companion video to the Spring 2018 issue of The Meaning of Care Magazine, learn how Methodist Jennie Edmundson is leading the way in reducing readmission rates by working with community partners.

Asit Goswami, MD: Male was admitted with poorly controlled Type 1 diabetes other illness he has had multiple hospitalizations for DKA. He has not been regularly taking his insulin or checking his blood sugars. I'm very concerned about this patient's health and well-being.

Steve Baumert, CEO – Methodist Jennie Edmundson Hospital: Many of the things that were causing the readmission rate were things out of our control. Who could go into the home check on the patient begin to assess that component? We also recognize that some of our partners were better at it than we were that we could use existing programs that people didn't really realize were available or didn't have access to.

Lorrie  Reddish, RN: A lot of our patients at the hospital here were are elderly individuals and so I actually went out to Connections, our area of aging, to talk to them about their services and to see if they wanted to partner with us to maybe look at an individual in the hospital following them when they go home to help look at how do we keep them in their home instead of having them back to the hospital.

Delbert Henrikus: And you have a high tolerance for that pain. He said, "you took it good". Well, like in my case I was the one doing the driving and everything, I couldn't do that. So they helped out and figured out my transportation to and from the doctor's appointments and I'll the stuff I had to do in that part.

Reddish: And our first year we were able to decrease our readmissions by about 19 percent. Once we started recognizing what some of those issues were then the program continued to build.

We do have some patients on the floor that will come, you know, as a direct admit but most of them I would say probably come through the emergency room that have more of those needs.

And today's one of those days

Reddish: We have had people come in the emergency room and these are going to be your individuals that probably have some mental illness and substance abuse and really probably have not really felt like they've been loved much.

Bardon: So if I have a patient that I know was following with like Heartland Family Service I will send them through TAV. A notice that that patient is here so that they can sometimes they will come up and see them. Let me go tell this family that we've got a ride for them.

Reddish: What I hear from my community partners all the time is that we are further ahead than most areas and this isn't something that just Jennie Edmundson's working on it is something that's being done across the entire United States is working and care coordination. Several individuals, obviously, who've gone through the program who lives are much better just because we touched them and been in the program and helped them so.

Baumert: We all have a piece and we all need to be able to work together and connect and I think ultimately it changes people's lives.

Full article published in "The Meaning of Care Magazine" | Spring 2018

Hailing from Charlotte, Michigan, Daniel Johnson joined Methodist Health System in 2016.  He currently works as the Marketing Multimedia Specialist.  Dan brings more than a decade of professional image making experience to the team. 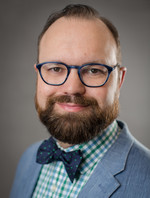