He listened to his gut in making the decision to move back to Nebraska from Oregon to take care of his elderly parents.

Once back in Omaha, he listened to his brother in making the decision to take care of himself.

“I had a sore throat for about three years,” Ron Sindelar said. “But I had no income. I had no savings. I had no health insurance. Still, my brother insisted that I see somebody about the lump in my throat.”

The Discovery of Cancer

Ron got in to OneWorld Community Health Centers, which provides health care to the underserved. From there, he was referred to Methodist. His diagnosis? Stage 4 oropharyngeal cancer – or cancer of the throat.

“I knew that’s what it was,” he admitted.

He assumed his prognosis wasn’t good, but doctors told him he had at least a 60 percent chance of survival.

Ron agreed to move forward with treatment. That included the loss of his teeth, a feeding tube and six weeks of intense radiation and chemotherapy. Doctors warned him he may never be able to eat or drink again.

Learning How To Swallow Again

Amazingly, Ron no longer needs a feeding tube. Thanks to the help of oncology dietitian Jami Tran-Balk, RD, LMNT, he’s eating and drinking enough on his own.

“The post-treatment care is probably what’s most phenomenal here,” he said while crediting speech-language pathologist Liz VanWinkle, MS, CCC-SLP, who taught him how to swallow again.

“I can’t drink water like a normal person because there’s nothing there to keep it from going down into my lungs,” he said. “She taught me a technique on how to manage drinking and not drown myself. It took a long time, but she was persistent. She found a way for me to learn it.” 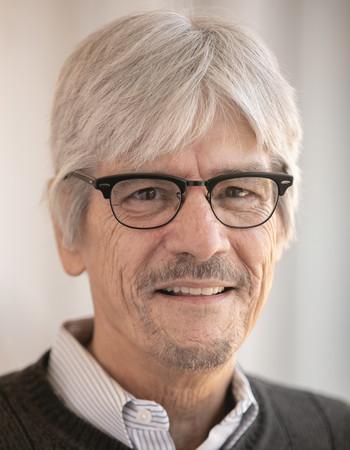 Back To a Normal Life

Beyond treatment, “the whole group was so cognizant of the total experience,” Ron added. “It’s not just, ‘We’re going to make you well and then good luck.’ They’re concerned about getting you back to a normal life.”

And that’s important, Buchholz said, because especially with something like head and neck cancer, a lot of things won’t be the same for a patient after treatment. He or she must find a new normal.

“When I first met Ron, he was not in a happy place,” Buchholz said. “His treatment was pretty rough. I think he realizes now that he has a lot of life to live. He saw his daughter get married, and he’s able to care for his elderly parents. Those things have been important for him. Although different in many ways, he has a good life. I think he sees that.”

He also sees that his decision to return home led him to the care he needed most.