He hears it every day.

But Amy Brown had no idea she was. In fact, the 44-year-old mother of three isn’t scared of much. She prides herself on powering through most things in life with high energy and a “go get ‘em” attitude. So, it came as a shock when she realized that one of her greatest fears is being in a confined space, unable to escape.

Tessin, a very calm, gentle soul, used his soothing voice and problem-solving skills to help Amy face her fear and find the root cause of her chronic neck and shoulder pain.

Feet first into her first MRI

For years, Amy relied on massage therapy, dry needling and “a whole lot of Icy Hot” to temporarily numb her pain. It wasn’t until her left arm actually went numb that Amy had a serious conversation with her doctor, Katharine McLeese, MD, an internist at Methodist Physicians Clinic Regency.

“That was the first time anyone suggested that I get an MRI,” Amy said. “I thought, ‘Sure. Great. Let’s do it.’”

When Amy arrived at West Dodge Medical Plaza for scans of her neck and hip, she met registration specialist Mary Holland.

“She was smiling. She gave me my little sheet and checked me in, and she explained everything that would happen next,” Amy said. “In a day and age where good customer service isn’t always a given, I thought, ‘Wow! These are some nice people here!’”

Holland wasn’t the only person who put Amy at ease. She soon met Tessin.

“We get a lot of compliments on him,” Holland said. “Everyone appreciates his calm demeanor.”

Tessin attempted a cervical (neck) MRI on Amy first. For that, a special collar is used – one that firmly secures the head and restricts neck movement.

“I could tell that made her … uncomfortable,” Tessin said.

“Oh, I was ridiculous,” Amy admitted. “My breathing got faster. I thought, ‘This is crazy. What is going on? Why am I so nervous?’”

That’s when Tessin suggested they move on to the hip MRI and come back to the neck later.

“Hip scans are very different from neck scans,” Tessin explained. “You can go in feet first. There’s nothing confining your head or neck. There’s a similar camera piece involved, but it just goes over the area we’re looking at.”

Amy made it through the hip scan without a problem.

“The second I heard that collar click, I was like, “OK! You know what? Nope. No. I can’t do this. I need to get out of here. I was hysterical! I was bawling! It was irrational. And I was so embarrassed – so upset – like, ‘Why am I behaving like this? How am I not getting through this?’”

Tessin assured Amy that it’s not uncommon for people to feel that way.

“But I left feeling like I had just wasted so many people’s time,” Amy said.

Facing her fear with a hand to hold

After talking with Dr. McLeese, Amy returned to the clinic two days later to give the neck MRI another shot. Once again, Amy saw Holland’s smiling face at the registration desk.

If Holland has learned anything in her almost 20 years with Methodist, it’s this: “You never know a patient’s circumstance or why they’re there or why they’re back. So, you just always treat each person with kindness.”

Tessin was the other familiar face Amy saw at that appointment, but she also met someone new.

Tessin knew Amy was coming in that day, so earlier that morning, he asked imaging nurse Amy O’Brien, RN, ASN, if she could accompany him during Amy’s neck scan.

“I thought it might help to have someone talk her through it,” Tessin said.

“It just so happened that I was available, and I had time,” O’Brien said. “So, I stood there, gave her some gentle pats, held her hand and applied gentle pressure – because I’ve learned you need to do that with people who are claustrophobic. They need to know that you’re there and that they’re OK – that you can help them get out if something were to happen. And she squeezed my hand back.”

“Oh my gosh,” Amy said as she started laughing. “I crushed her poor fingers!”

Tessin knew Amy was still struggling with the thought of being confined. He wondered what else he could do. That’s when he thought of trying a different, less restrictive collar on Amy – one that’s typically used for patients who aren’t able to lie flat on their backs for an MRI.

“Either their anatomy doesn’t allow it, or they’re in too much pain,” Tessin explained. “We can use it on any part of the body – a knee, elbow, wrist. The drawback is that the picture quality isn’t usually as good.”

Still anxious, Amy tolerated the collar with the help of O’Brien by her side and Tessin checking on her every so often.

“I just felt like everyone there was putting in that extra effort,” Amy said.

And she finally made it through that MRI. 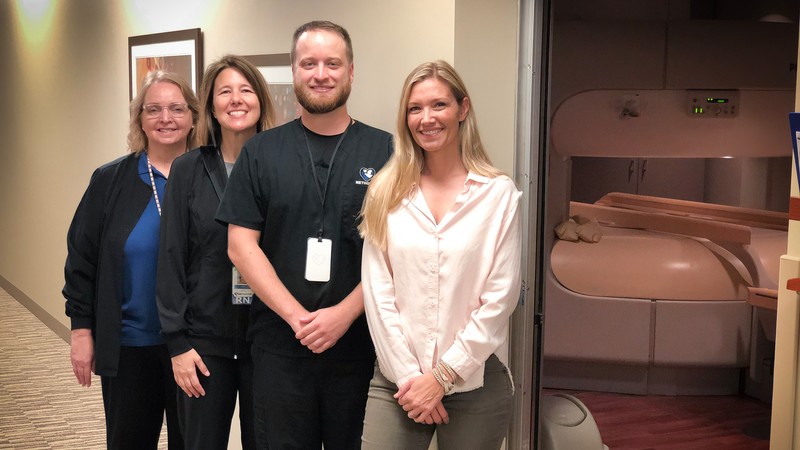 “We always hear people apologize for being nervous and whatnot,” O’Brien said. “But we want to get them through that MRI just as much as they want to be done with it.”

“Exactly,” Tessin agreed. “The important thing for us is doing whatever it takes to just get patients through it. We want them to be comfortable. We want them to leave with answers so they can get the treatment they need.”

Thanks to an imaging team that went above and beyond and some “surprisingly really good pictures,” according to Tessin, Amy discovered that she was suffering from a herniated disk. The soft center of one of her spinal disks had bulged outward. This resulted in a pinched nerve, which is what caused the numbness in Amy’s arm.

“I’ll never forget the morning after my first epidural and steroid shot,” Amy said. “I woke up with no pain! None. And let me tell you: You don’t realize how much pain you’re in until you wake up without it. I was living that way! And to think that if these people wouldn’t have been as patient as they were with me – or if I once felt like they were judging me – I probably wouldn’t have come back.”

Happy with the care she received, Amy wrote an email thanking Tessin, O’Brien and Holland for the compassion they showed and the safe environment they created.

“I just wanted them to know how much it all meant to me,” she said. “They walk the walk. They truly stand by that Methodist tagline.”