If you can’t get your teen to wake up in the morning, they might have stayed up too late using Snapchat and TikTok.

The average teen spends nine hours a day in front of a screen, more time than they spend sleeping. About a third of that time is spent on social media. Recently, concerns have arisen over the connection between teens’ social media use and their mental health, with many parents asking if social media is making their child anxious and depressed.

The amount of time spent on social media doesn’t correlate to increased or decreased anxiety and depression. However, what teens are consuming on social media can have a negative impact on their mental health. Many teens suffer from FOMO, or fear of missing out. Social media often features filtered, false portrayals of life, making teens feel like their lives are lackluster. Teens might also see posts of friends spending time without them and feel excluded.

Sleep and exercise – two activities that have positive effects on mental health – can help stave off anxiety and depression. But social media use has been found to disrupt both activities, especially in girls, who deal more frequently with digital drama and cyberbullying than boys. The more time teens spend on their screens, the less time they spend sleeping or being physically active.

Lack of sleep affects memory and mood. It can increase stress levels and lead to impaired driving. Lack of exercise can cause immediate or future health problems and affect motivation and self-esteem. Our bodies need restorative sleep to function, and exercise introduces routine, which helps combat depression. Limited exercise also means teens lack an outlet to tire themselves out and sleep better. If your teen struggles with both, help them focus on improving sleep first, and then help them tackle physical activity. Get moving as a family, even if it’s just for a 15-minute walk. Every bit counts.

Many families create media agreements, which include rules for social media use. Coming up with an agreement should be a conversation approached with empathy. If you don’t try to understand why social media is important to your teen, they may rebel. Acknowledge that you know how important it is to them to stay in touch with their friends, but that you’d also like to spend more time as a family without being on your phones. Have replacement lifelines or activities in place – game nights, family hikes or bike rides, reading, cooking together – that are supportive enough for them to cope with the changes.

Practice What You Preach 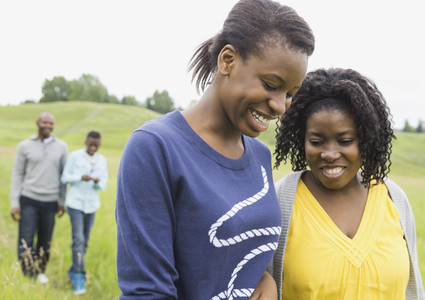 Parents need to be careful not to set too strict of limits on social media use. The goal is to create realistic rules that help teens be more responsible and resilient. More importantly, parents should practice what they preach – 51% of teens say that they often notice a parent or caregiver distracted by their own phone during conversations. Other ways to help your teen include:

With 54% of teens believing they spend too much time on their phones, they, too, can take steps to limit their use and stay safe on social media. Suggest that they:

If you still feel like your teen’s social media use and mental health aren’t improving, it might be time to seek out a counselor. A counselor will focus on the underlying issues that contribute to overuse. Your teen might need help coping with FOMO or depression, or they might need help making friends. A counselor can help them work on their social skills, limiting social media use as a step in that process.

There isn’t one answer to protecting your teen’s health when it comes to social media. When in doubt, educate, empathize and work together as a family.