What Are the Odds? Catching Up With Methodist Women's Hospital's First Spontaneous Identical Triplets

“Well, you’re definitely pregnant with triplets,” Robert Bonebrake, MD, told Amber Morgan, who only two weeks earlier had been told she was having twins. But that first ultrasound didn’t tell the full story. There were three heartbeats – not two.

Amber had already defied the odds by getting pregnant while on birth control. Now she was pregnant with spontaneous identical triplets – the first at Methodist Women’s Hospital.

What are the odds of conceiving spontaneous identical triplets? We don’t actually know. You could say “one in a million,” but they might be one in 200 million. Or they might be one in 60,000. Whatever the odds, all Amber cared about was the next piece of news from Dr. Bonebrake. Baby A and Baby B were sharing the same sac, making an already high-risk pregnancy even riskier.

Amber, already a mother to 4-year-old son Skylor, wasn’t expecting to get pregnant – hence the birth control. And when she went in for her first ultrasound, she wasn’t expecting multiples. An ultrasound technician suspected triplets, but her doctor said no, there were only two. Mentally preparing for twins, Amber returned two weeks later for another ultrasound.

“I’ll never forget: I was in this room, and there was an Anne Geddes picture on the wall of three babies,” she said. “And for some reason that picture still sticks out in my head. And then they came in, and it was clear as day that there were three.”

That’s when Amber was referred to Dr. Bonebrake, a maternal-fetal medicine specialist at Methodist Women’s Hospital. He confirmed she was having triplets, that they were identical and that Baby A and Baby B were sharing a sac. Ideally each triplet would develop within their own sac, like Baby C was doing. Sharing a sac risks cord entanglement, which could cut off their blood or oxygen. If that happened, an early delivery would help Baby A and Baby B but put Baby C at risk.

It was a lot for Amber to take in. Dr. Bonebrake ran her through each scenario of what could happen to the triplets. Weekly ultrasounds to check for three heartbeats became her new normal. Knowing how anxious she was, Dr. Bonebrake never made her wait long for those heartbeats.

“I had no idea what I was looking at on the screen, but I knew when I saw those three different heartbeats that we were good,” Amber said. “Every week that was a huge thing.”

When it was time to find out the triplets’ gender, Amber had no doubt they were girls.

“There was something in the pit of my stomach that told me they were girls,” she said. “It was just so different from my son … obviously.”

"Oh My God, I Have Triplets Now"

One of Amber’s biggest struggles throughout her pregnancy wasn’t physical – it was emotional.

“I was like, ‘I already have one child at home. I know how to give him unconditional love,’” she said. “How do you then divide your love up among three more all at the same time? How do people do this?”

Amber would find out soon enough. At 24 weeks, she had doctor’s orders to stop working – a blessing since she was able to spend time with her grandmother in the last two weeks before her passing. And then at 26 weeks, she began bed rest at Methodist Women’s Hospital.

“I had a great view of the parking lot,” she said with a laugh.

Her days now consisted of being monitored three times a day for 20 minutes at a time in order check the babies’ heartbeats. One night during week 28, Baby A’s and Baby B’s heart rates were low. After 20 minutes they returned to normal, and Amber went to sleep. But when the nurses listened the next day at 7 a.m., they had a flurry of questions for her: Was she cramping? Was she in pain? Did she notice blood when she went the bathroom?

Dr. Bonebrake wasn’t on call that day, so maternal-fetal medicine specialist Andrew Robertson, MD, would be the one to deliver. They needed to move quickly, which meant Amber would have to go under.

“Are you ready?” a nurse asked Amber. “I don’t think so, but I have no choice,” Amber said.

At 7:21 a.m. on Aug. 26, 2015, Baby A and Baby B – Sharlet and Sydnea – were delivered together via cesarean section because their umbilical cords were knotted three times. Baby C – Savana – came at 7:22 a.m. They each weighed between 2 and 3 pounds. From the moment Amber was told it was time to the moment her final baby girl was born, only 22 minutes had lapsed.

“I was like, ‘Oh my God, I have triplets now,’” she said. “And I asked, ‘Are they OK?’ And they said, ‘They’re fine. They’re perfect. They’re just up in the NICU right now.’ And I just kept asking for them over and over again after I realized that I’d had them.”

Amber wouldn’t get to see her baby girls until a full 12 hours after they were born. Sharlet and Sydnea, the ones who had a shared a sac, also shared a room in the Neonatal Intensive Care Unit (NICU). Little Savana was in a separate room.

“It was almost an out-of-body experience the first night seeing them,” Amber said. “I have the pictures. I can see the pictures. I can remember being there. But the touch and the smell – that doesn’t exist to me because it was so overwhelming. My emotions were through the roof.” 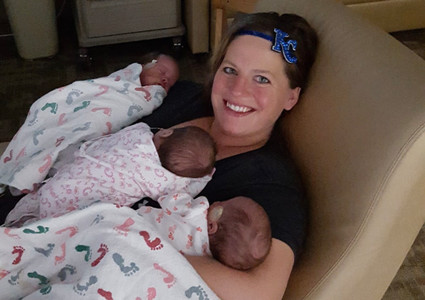 She remembers being afraid at first to touch them.

“But I’m their mom,” she said. “Yes, they’re fragile, and they’re little, but I knew that I couldn’t hurt them by touching them.”

Amber was determined to have her girls all go home on the same day, which isn’t typical for multiples. But they defied the odds again. On Nov. 2, after 68 days in the NICU, Sharlet, Sydnea and Savana passed their car seat test, and Amber took all three home.

Amber said that as much as the NICU staff made her feel like the mom, there were times she would worry that her daughters wouldn’t want her in the middle of the night once they were home.

“Trust me,” she said. “When they came home that day, I knew I was their mom then. ‘You guys are making it very clear who the mom is. Thank you for that.’”

Amber, who takes the girls to visit Dr. Bonebrake every year, is grateful to him and Dr. Robertson for the advice and care they gave her at Methodist Women’s Hospital.

Today, Sharlet, Sydnea and Savana are approaching their fifth birthday and are excited to play T-ball, their first sport. For identical triplets, the girls couldn’t be more different. Sharlet, the observant one, lets the other two do something first before following suit. She studies and waits. Sydnea, the leader, does everything first with no fear. Amber predicts she’ll be the one to give her gray hair. And Savana, the lovey-dovey one, wants to make everyone smile. After growing in her own sac and having her own room in the NICU, she always wants to be around people.

All three girls adore their 9-year-old brother Skylor, or “Bubba” as they call him. And Amber says he’s “the best big brother.”

“They all have their own special bond,” Amber said. “It’s just amazing to see that with those four. I always said if something were to happen to me that they have each other – that God made these four individuals to be siblings, and as long as they stick together, they will be fine.”

Even though Sharlet, Sydnea and Savana are identical, Amber hopes they find their own voices, personalities and happiness. The odds seem to be on their side.

“As long as your kids are happy and they are loved, that’s all that matters,” Amber said. “They have so many people around them that love them and want to see them do big things. It’s easy when you have that support. They’re a force to be reckoned with, and they have a great big brother. The world is their playground.”