Long before she donned the Methodist blue, Patty Sieler, RN, a cardiovascular triage nurse with Methodist Physicians Clinic, discovered her calling while wearing red and white.

She was just 14 when a friend recruited her to volunteer at a local hospital.

“She said, ‘Come be a candy striper with me!’ And so I went,” Sieler said. “They gave us these little red and white striped pinafores, white blouses and white shoes. They had us change into these little uniforms, and then we followed a nurse. I watched these nurses run into rooms, caring for patients with such urgency. I just knew that was what I wanted to do.”

What she didn’t know was that the path to get there would be ever long and difficult.

A Dream Put on Pause

As it oftentimes does, “Life just happened,” Sieler said. She got married and had kids – including one who needed a lot of medical attention when he was young – and so, her nursing plans were put on hold.

“I was a stay-at-home mom for 25 years. I homeschooled for 17 years. So, when I got divorced, it was like, ‘All my kids are in college, I homeschooled them, and I don’t have a college degree.’ That’s when I went to nursing school.”

Sieler completed her certified nursing assistant and medication aide courses at Metropolitan Community College (MCC). There, she also earned associate degrees in practical nursing and nursing. The single mother of eight and grandmother of eight did it all in six years.

A Long-fought Battle With COVID-19

In early March, just as Sieler was finishing up nursing school, she became ill with COVID-19. Her first symptoms? A fever and sore throat.

“Eventually, I felt like an elephant was sitting on my chest with its trunk wrapped around my throat. My ribs hurt really bad, and by week four, I developed pneumonia.”

Having battled scarlet fever, rheumatic fever and mononucleosis when she was younger, Sieler said COVID-19 will go down as the worst illness she’s experienced. In fact, it wasn’t until recently that she finally started feeling somewhat like herself.

Sieler’s illness had caused her to miss two months of work without any paid time off – she had used it all for school. And when she was finally cleared to return to work, she faced another uphill battle.

“I remember studying in the living room one night. I turned around, and my mom was standing there. It was really odd for her. I turned on the light and said, ‘Mom, what are you doing?’ She was crying – like she knew what had happened. And then all of the sudden, she was gone. Her facial expression – it was just gone. And she never said another word.”

Sieler called 911. Her mom had suffered a stroke.

“They weren’t the right words, and she was always struggling for words,” Sieler said. “But the one word she could say was ‘home.’” 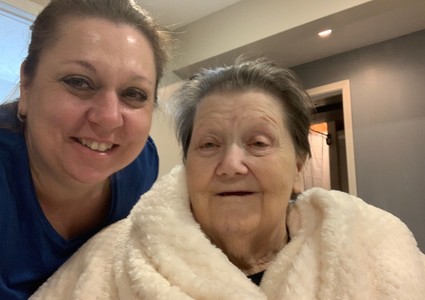 Knowing her mother would need around-the-clock care, Sieler transformed her basement into a “grandma cottage.” With help, she finished a bathroom, acquired furniture and prepared a bedroom. She slept on the basement couch to care for her mother through the night. And every day at 5 a.m., Sieler, still short of breath from the lingering effects of COVID-19, would go upstairs to get ready for work. She’d then come downstairs to administer her mother’s morning medications, help her with breakfast, get her cleaned up and get her dressed.

“Just that constant trying to catch your breath,” Sieler said. “And the muscle aches. That was hard. Your arms and legs feel like they’re a thousand pounds. And I probably needed to make three trips up and down those stairs every day.”

It Took a Village

Sieler’s daughter would arrive at 7 a.m. every day to take over care while Sieler went to work. But Sieler’s evenings looked much the same as her mornings. When she returned from work, she’d prepare her mother’s dinner, administer her evening medications and get her ready for bed. She did all of this as her nursing finals neared.

“I called my instructor and said, ‘I know my paper is due, and I’m going to have it done on time. I just need you to know what’s going on,’” Sieler said.

Without being asked, her nursing instructor at MCC, Kristin Dolezal, MSN, came to her house to help where she could. After all, Sieler was still trying to care for her 18-year-old son and 9-year-old granddaughter.

“She took over my kitchen and fed my kids,” Sieler said. “She took care of everyone upstairs while I cared for my mom downstairs.”

Just a week and a half after establishing a “new normal,” Sieler got a call at work from her daughter.

Sieler’s mother had suffered another stroke. She passed away 11 days later.

Honored for Dedication and Determination

For staying the course while caring for her mother, children and Methodist patients, Sieler received The DAISY Award – a national honor that recognizes the extraordinary care of nurses. It was Dolezal who nominated her.

In Dolezal’s nomination letter, she praised Sieler for her dedication and determination despite everything that could have derailed her. But dropping out of nursing school and finding other care for her mother were simply not options for Sieler.

“My mom was an amazing lady. She was a single mom who worked three jobs to pay for us to go to a private school, and she had nothing of her own. I think I learned it from her – the never giving up. Growing up, there were times we clashed. But I’ll tell you what,” Sieler said as she quickly became emotional. “She was the epitome of unconditional love. I needed to return that. And yeah, I think I wanted to make her proud, too.”

While Sieler admits that her mother and family always came first, she was never too exhausted or too emotionally drained to provide excellent care to her Methodist patients – mainly because in her eyes, they’re not patients.

“They’re someone’s mother, too,” she said. “Or daughter, sister, brother or husband. It all goes back to The Meaning of Care. It’s not just, ‘You have this condition, you need this treatment, and now we’re going to conveyor belt you down the line.’ The Meaning of Care is do you care? And if you care, then is it heard in your voice? Is it seen in your actions? Is it part of your heart? If it is, you treat every patient like family. Because they are. They’re someone’s family, too.”