Had Annabelle Anderson known her husband was having a heart attack, she would have called an ambulance.

Larry had recently been treated for a blood clot in his lungs, and now he wasn’t feeling well again. Thinking he might have pneumonia, Annabelle drove Larry from their home in Shenandoah, Iowa, to Methodist Jennie Edmundson Hospital in the middle of the night last fall.

She dropped Larry off at the Emergency Department before parking. When she returned, doctors told her how serious the situation was. Luckily, they had about an hour to work with before Larry would suffer permanent heart damage.

“Talk about a blessing and being there at the right time,” Annabelle said.

It wasn’t the last blessing the couple would receive during their stay at the hospital.

Johanna Weidert, ADN, found her passion for nursing through heartbreak.

In 2001, her mother was in the intensive care unit with sepsis and pneumonia at what is now Creighton University Medical Center-Bergan Mercy. By her third day there, with her life drawing to a close, a nurse named Vince sat at her bedside with his guitar and sang “Can’t Help Falling in Love” to her.

Inspired by that act of compassion, Weidert started her nursing journey the next year. After studying at Nebraska Methodist College, she became a certified nursing assistant on the Methodist Hospital telemetry unit. After earning her associate degree in nursing in 2016 from Iowa Western Community College, she joined the Telemetry Services staff at Jennie Edmundson. She hopes to complete her bachelor’s degree in nursing in the next year or two.

“I love what I do, and I can’t ever see me doing anything else ever,” she said. “This fills my bucket. We all have a bucket, and my patients and my work family fill my bucket. They make me whole and complete.”

Weidert wanted to thank Vince and returned to Bergan Mercy a few years after her mother’s death. But he had moved on, and she didn’t remember his last name.

“I wish that he would know what his kind heart had done and what it had inspired,” she said. “He helped me find that purpose that I was looking for.”

Caring for Husband and Wife

After Larry arrived at Jennie Edmundson, his care team quickly had him on the path toward a good outcome. Weidert was among the staff members who stood out to the Andersons.

“I felt like Larry and I were definite family to her,” Annabelle said. “Her attitude was helpful. She was encouraging. She was very pleasant and very knowledgeable.”

Larry was on the mend, but the Andersons had another potentially serious situation unfolding. Annabelle herself was battling hypertension stemming from blockages to her kidneys. In the rush to get Larry to the hospital, she hadn’t brought along enough of a prescribed medicine.

Weidert encouraged Annabelle to shift the focus to herself for a moment and call her doctor. Then Weidert went a step further – calling a nearby pharmacy and going on a break to pick up the vital medication for Annabelle.

“I almost cried,” said Annabelle, who was unfamiliar with Council Bluffs. “I was just overwhelmed. I said, ‘That is so sweet of you.’”

“He was so worried about her. He just loves her. He told me about how they traveled together and how they met,” she said. “It’s not going to help my patient be any better if he’s so worried about his spouse. And this was one thing I could help with.” 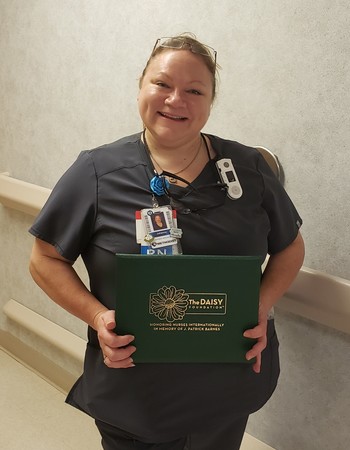 The Andersons were so impressed with Weidert’s care that they nominated her for The DAISY Award, which recognizes nurses for extraordinary skill and compassion.

“When somebody does an exceptionally nice job, I always compliment them or talk to the manager and tell them what a wonderful job they did,” Annabelle said. “I think life’s too short not to give praise when praise is due.”

Weidert, who was surprised with the award last month, said she never thought she’d receive such an honor. She doesn’t compare with the great nurses she’s worked with, she said.

“It kind of validated that I made a difference,” she said. “That’s why I started in this whole thing, and it’s come full circle. I started because somebody was so generous and kind. I was just doing what came naturally, and somebody recognized that.”

Although it’s been a year since that late-night drive to Jennie Edmundson, Annabelle said she won’t forget her “treasured friend” Weidert.

“I think she got in the right occupation,” Annabelle said. “She’s just a wonderful, wonderful person.”