New Home for Women and Newborns Matches Level of Care

“It’s like home away from home. It doesn’t feel like a hospital,” Catania Phillips (pictured above) of Omaha said as she held her 1-day-old daughter, Charity Lynn.

Charity’s birth on Feb. 8 at the Anne Elizabeth Nelson Women and Newborns Center at Methodist Jennie Edmundson Hospital marked a joyful end to a year that began with tragedy, when Catania’s first baby was stillborn at 28 weeks gestation in March 2020.

“The amazing staff at Jennie – they really helped me get through the last loss and supported me through my entire pregnancy,” she said.

As she and her husband, Brandon, gazed at Charity in their postpartum room, Catania said she felt like they were already in their bedroom with their little girl next to them.

“I don’t feel homesick like last time,” she said. 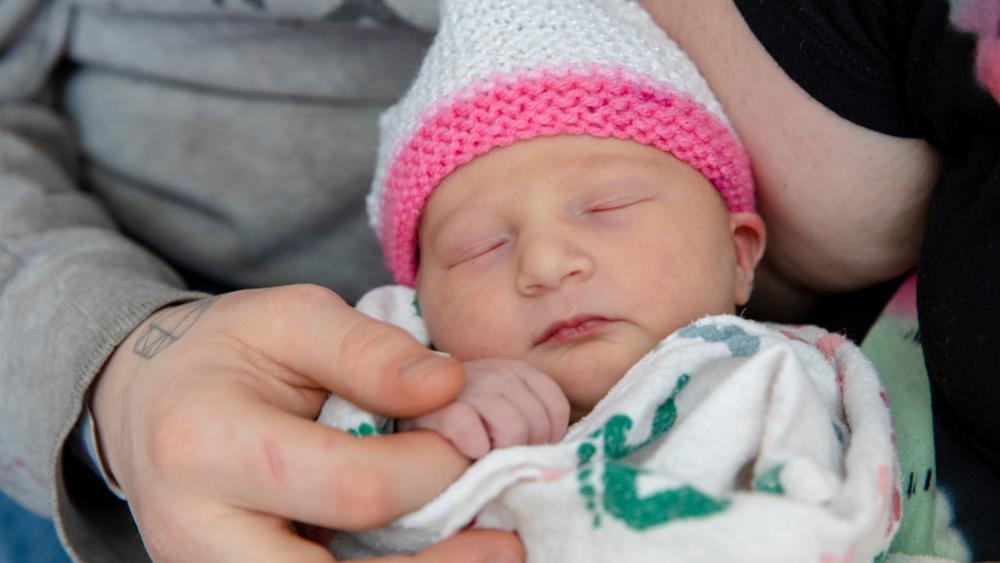 That feeling of home – the warmth, the privacy, the environment – is all by design.

In December 2020, Jennie Edmundson unveiled Women and Newborns on its fifth floor – a state-of-the art home for moms and babies in western Iowa. The 18,000-square-foot renovation project cost $10.75 million and features:

The project was a longtime goal and part of Jennie Edmundson’s commitment to making the campus a destination for women’s health care in western Iowa. It all started a decade ago with growing the Methodist Physicians Clinic Women’s Center OB/GYN group in Council Bluffs.

“The goal was to bring women’s health care back to Council Bluffs and specifically to Jennie Edmundson,” said OB/GYN Lori Platt, MD. “So, when we started, we were really vested in providing excellent care for women and knew we wanted to build a good, solid group.”

Now with 10 providers, the group is based at Methodist Jennie Edmundson Medical Plaza – an $18 million, three-story medical office building completed in June 2020. As the OB/GYN group and its reputation grew, thoughts turned to having a unit for women and newborns at the hospital to match the quality of care Jennie Edmundson already provided.

“We didn’t have the aesthetics part of it before,” Dr. Platt said. “Patients still came here because they really loved the physicians and nursing care. But this is the icing on the cake. We can finally give patients the experience they dream about.”

“The expansion of our women’s health services at Jennie Edmundson through the years has been incredible,” said Steve Baumert, president and CEO of Methodist Jennie Edmundson Hospital. “I’m proud of everyone who united in a common goal to bring this new, beautiful space for women and newborns to western Iowa. It just further demonstrates our commitment to providing exceptional care to our community’s growing families.”

With the beautiful design comes the ability to have a low-intervention birth, when possible.

“We want you to come in and have your baby safely,” said Ashley Nihsen, MSN, RNC-OB, C-EFM, director of Women and Newborns. “We want to guide you through that and give you the delivery of your dreams.”

“We’re creating a more hands-off experience,” Hericks said. “Even in situations where you may have a more high-risk delivery, we can still give you a low-risk experience.”

A low-intervention, natural birth is what another of Hericks’ patients – Brittnee Moss, who lives in Plattsmouth, Nebraska, but works in Council Bluffs – is hoping for in early May, when she’s expected to deliver her first baby.

“I want to try and do a natural birth as much as I can,” Brittnee said. “I want to experience all of it and embrace all of it.”

To facilitate that natural birth, laboring moms can utilize the new Jacuzzi tubs and get up and move around more with portable fetal monitoring.

“The more you can use gravity with your body and change your position, the more it changes the shape of your pelvis and allows babies to move through a little bit easier,” Hericks said. “Then you have hydrotherapy – it helps increase endorphins. All of that helps relax you a little bit more, which helps to progress labor.”

Labor and delivery nurses from Methodist Women’s Hospital have also been taking the workshops at Jennie Edmundson – one example of the standardization of care between the hospitals.

“That’s been going on for a long time,” Dr. Platt said. “Changing policies and procedures to provide women with excellent care and safety, and having that commonality between the three hospitals, has been really wonderful.”

Maternal-fetal medicine specialist Joshua Dahlke, MD, is among the physicians based at the Methodist Hospital Perinatal Center in Omaha who also sees patients at Methodist Jennie Edmundson Medical Plaza. Because of a clotting condition called Factor V Leiden, Catania’s pregnancy was considered high-risk, and she regularly saw Dr. Dahlke and others from his group – conveniently on the same floor as Hericks.

“The goal of our high-risk service is, when it’s feasible and safe, to have moms deliver in their home hospital,” Dr. Dahlke said. “It makes my job easier to say, ‘You’re in great hands here, and you have a wonderful facility to bring your baby into.’”

With Women and Newborns, Jennie Edmundson built a space to meet the level of exceptional care patients had already come to know.

“There’s a certain consistency both in the physical space and the care that’s beneficial to Council Bluffs,” Dr. Dahlke said. “It represents a commitment to the community to provide a space for what I would consider the best obstetric care in the region.”

And what ultimately drives patients to Jennie Edmundson is the relationships. Brittnee was drawn to Hericks’ energy and personality when she started seeing her for polycystic ovary syndrome. She chose to stay at Jennie Edmundson even though the rest of her family delivers elsewhere.

“I feel like Desiree’s a longtime friend,” she said.

“You’re not a number here,” Nihsen said. “As much as we leave an imprint on our patients’ hearts, they leave one on ours. We remember you. We see you in the community. We run into you in the grocery store. You’re our family, and we become yours.”