When an Emergency Visit Means a ‘Second Chance To Live’

He woke up to a bright, nearly blinding white light. A number of people were scurrying around him – all of them working swiftly and purposefully. Zach Wimer compared the moment to waking up from a deep sleep, unsure of where he was.

Zach didn’t realize that something had already happened to him – but he was in the best place possible. Because he made the 25-minute trip to Methodist Fremont Health’s Emergency Department (ED), he’s alive to share his story.

Fear of the ED

The COVID-19 pandemic has undoubtedly caused a great deal of second-guessing and careful decision-making by families desperate to keep their loved ones safe. Among the matters they seem to be debating: when and whether to receive emergency care.

The Centers for Disease Control and Prevention discovered a 42% decrease in emergency department visits early on in the pandemic.

“We saw that here, too,” said Michele Williams, MD, emergency department medical director at Methodist Fremont Health. “Patients were hesitant to come in because there were other patients here with COVID-19, and they didn’t want to be exposed to that. We’re not seeing that as much anymore, but certainly it’s still an issue.”

While Zach admits to delaying minor medical and dental appointments because of COVID-19, his hesitancy in going to the ED had nothing to do with the virus. He simply wondered whether his chest pain was serious enough. 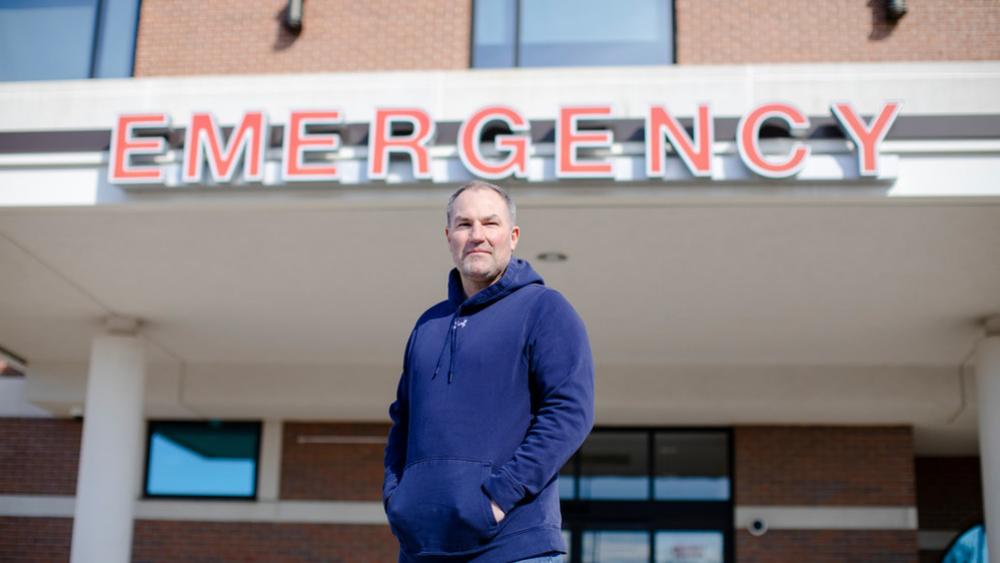 Ultimately, his decision to seek emergency care came down to: “I had never experienced pain like this. It wasn’t necessarily unbearable. It was just different.”

Zach’s “different” kind of pain began as he was working from home on Dec. 16.

“I started to feel a little burning in my chest. Then it’d radiate to my back – in between my shoulder blades. It’d last for about five to 10 minutes. Fifteen minutes later, the burning sensation in my chest would return before I felt that same pain in my back. With each sequence, my back pain would be a little more intense than the previous time.”

He let the sensations continue a bit before consulting his wife. She was home, too, watching their 11-month-old daughter. Their three boys were in school.

“I was talking to my wife about the pain, telling her I wasn’t quite sure what it was. But in my mind the whole time, I couldn’t stop thinking about my dad’s experience.”

Zach’s dad survived a heart attack at age 56. In the moments leading up to his event, he, too, experienced unexplainable back pain – in between his shoulder blades.

After some discussion, Zach eventually recruited his wife to drive him from their home in Morse Bluff. They loaded up their baby girl, and the three headed for the nearest emergency department – at Methodist Fremont Health.

“I walked through the sliding doors and went up to the desk,” Zach said. “It was only a matter of a minute or two, and a medical professional was coming out to greet me.”

According to Dr. Williams, Zach’s initial electrocardiogram – a test that gauges the heart’s electrical activity – looked slightly concerning but signaled no cause for alarm.

“It was enough for us to say, ‘OK, something may not be right, and we need to keep looking to see what’s going on,’” she said.

The Emergency He Anticipated

As he underwent more testing, Zach called his dad.

“I had him specifically redescribe the exact pain and where he felt it when he had his heart attack. After that conversation, there was zero doubt in my mind as to what was happening to me.”

Moments later, Zach experienced another sequence. Without thinking twice, the 23-year law enforcement- and U.S Marine Corps veteran hit the call button on his bed. For a man who claims a fairly high pain tolerance, this piercing spasm, he said, was unlike anything he’d endured.

“The last thing I remember is someone coming to the door,” he said. “I told them, ‘I need help.’”

“And that’s when I heard them calling a code overhead,” Dr. Williams said.

Zach’s heart had gone into ventricular tachycardia, or a fast, abnormal rhythm. As a result, he suffered sudden cardiac arrest and needed electrical cardioversion – his heart needed to be shocked back into rhythm. He also received several chest compressions and medication to stabilize his heart. Shortly after being resuscitated, he was taken to Methodist Hospital in Omaha by helicopter.

“We have a lot of resources here in Fremont,” Dr. Williams said. “But we also have a direct connection with Methodist Hospital, and we can get patients there really quickly when we need to.”

Bottom line, she said: The nearest emergency department is the place to go if something – anything – feels eerily off.

“Just listen to your body,” Zach said. “You know it better than anyone.”

The Gift of Life

Zach returned home before Christmas on Dec. 20 – just two days before his daughter’s first birthday. He was greeted by homemade signs and his boys waiting outside. This was the moment he’d been waiting for – the chance to hug his kids again.

Zach now has two stents supporting a couple of his arteries. He’s completed six weeks of cardiac rehabilitation at Methodist Fremont Health – something he considers therapy in more ways than one.

“Walking on the treadmill for 30 minutes while being monitored and being able to see that my heart is doing exactly what it’s supposed to is reassurance that they’ve fixed the problem, that I can still do things, that I’m going to be OK.”

While his care teams in Fremont and Omaha praise his quick thinking and sharp intuition, Zach is certain of this: He’s alive and well because of them – and their commitment to The Meaning of Care. Zach Wimer returned to Methodist Fremont Health with his family to thank his care team for saving his life.

“I’m just so impressed. There’s not a thing I would change about that experience – not one negative thing I can tell you. Obviously I didn’t want to be there. I hope I never have to go again. But gosh, those people gave me life. They gave me a second chance to live. And that’s exactly what I intend to do.”