“One of my teachers once told me, ‘The best question you can ask a patient is, “What do I need to know about you to be able to provide you the best possible care?”’ You learn a lot just by asking that question,” Quigley said. “It’s so open-ended.”

But in December 2020, she wasn’t able to ask that question to 88-year-old Betty Coleman, who was admitted to Methodist Hospital after being diagnosed with COVID-19 and pneumonia. Betty chose to forego all treatment, which devastated her daughter, April Lowe.

“I understand the visitor policy, but it was just really hard to not be there with her. My mother gave so much to me, and I wanted to be able to – sorry,” April said, pausing to regain her composure.

Crying in between words, she continued: “I just really wanted to be there to at least hold her hand and talk to her at the end. I even asked her if she could wait until we got her home.”

Although April couldn’t be there, her daughter – and Betty’s granddaughter – Brittney Lowe, BSN, RN, an OB/GYN nurse at Methodist Women’s Hospital, got clearance to visit her grandma in full personal protective equipment. This provided some peace to the Lowe family, knowing their loved one had little time left.

“But after about five hours, I think it was kind of wearing on Brittney,” April said. “Because you don’t know if they’re going to hang on for another 24 hours or 24 minutes. So, Laura volunteered to stay with my mom that night. She also said I could call her any time at all. Well, I woke up at 1 a.m. I had this dream that she had already passed, so I called Laura right away. She said, ‘No, she’s still here. And I’m still sitting with her.’”

Quigley carried on that conversation by asking April all there was to know about Betty.

She eventually learned of the Lowe family’s Saturday morning breakfast tradition with Betty – at Harold’s Koffee House or Shirley’s Diner. She learned of Betty’s love for Shetland sheepdogs – how she bred and raised them and trained many of her dogs to become champions in area competitions. She also learned how hard-working Betty was – that she was a stay-at-home mom until April went to college. And she learned about Betty’s caring nature – how she was always helping other people.

While Quigley feels blessed to have never lost a loved one to COVID-19, it certainly felt like she did as she watched Betty take her last breath just a couple hours after that phone conversation.

“I just cried, held her hand, said a little prayer, and then yeah, I needed to step away and take a moment,” Quigley said. “My coworkers offered to call April for me. They understood what I was going through. But I knew I needed to call.”

“She was crying and sobbing,” April said. “It was hard for her to even talk. And, you know, I still struggle to this day – not being able to be there. I don’t ever want to lose someone that way again – not being there. But I can’t imagine where my heart would be if Laura wasn’t there that night. She genuinely cared. Not just about what we were going through – but she really seemed to care about Mom, too.”

As days passed, Quigley was always on April’s mind. 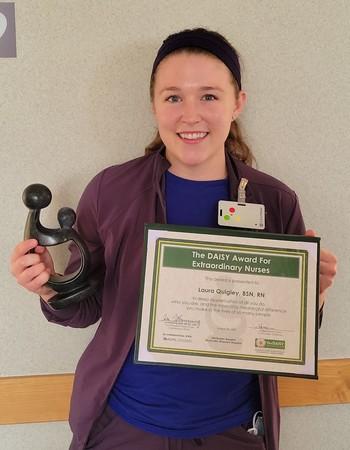 She finally got that opportunity in August after she and her daughter nominated Quigley for The DAISY Award – a national honor that recognizes the extraordinary care and compassion of nurses.

“I had been wanting to meet her, too,” Quigley said. “I’ve thought about her so much since December. My heart needed some closure.”

April’s needed some, too.

“I let her know that her mom was at peace and that she was taken care of,” Quigley said. “That we were there, we held her hand, gave her hugs, talked to her, made sure she was nice and warm. I mean, April knew all these things, but I wanted to reassure her in person.”

“I’ll probably forever have her name etched in my mind,” April said. “She’ll always be associated with us now. And I wish I could say it was something in particular, but it was everything she did. Her presence and personality were such comforts to me.”

According to Quigley, it’s all part of The Meaning of Care – and a little something she learned in school: “It’s about giving them the end of life they deserve even if family isn’t there. It means making a devastating situation a little less traumatic. And most importantly, it means getting to know the patient – through questions and stories – and really using that to guide your care.”