A Dream of Coaching Leads to Nursing; Methodist Caregiver Does Both for 50 Years

She never wanted to be a nurse.

She had long desired to coach football one day.

“I always watched football with my dad – since I was 11 years old,” she said. “And my uncle was a spotter at UNL. I’d sit and listen to them talk, and, oh, I just fell in love with it. Back in the 60s though, which is when I graduated, women couldn’t be coaches. Everyone kind of laughed me right out of there.”

But that didn’t stop her from pursuing her dream.

It All Started as a Dare

In 1971, Ernstmeyer enrolled at Kearney State College – now University of Nebraska Kearney – knowing that tuition would be her responsibility. She took a job as a nightshift nursing assistant in order to afford and attend health and science classes during the day. 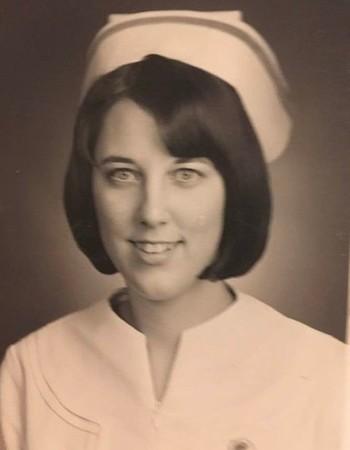 “I didn’t take those classes because I was interested in nursing,” she said. “In my mind, I was going to be a coach. So I figured I would need to know what a sprain was, what to look for – things like that.”

But a nurse that she was working with at the time encouraged Ernstmeyer to go to nursing school. When met with Ernstmeyer’s resistance, the nurse finally dared her.

“Well, you don’t dare a German Irish woman,” Ernstmeyer jested. “So I did it. I transferred my credits, I graduated from nursing school, and I told her I was only going to do patient care for a couple years.”

“I’m pretty sure God nudged me,” said Ernstmeyer, who’s strong in her faith and active in her church. “She was right. That nurse was right. I guess she saw something in me. I didn’t. But here I am. I really didn’t think I’d still be doing this.”

“The Rest Is History”

Having done hospital, clinic and parish nursing over the years, Ernstmeyer knows Methodist is where she belongs. And she credits her Methodist primary care provider, Terence Cooney, MD, for leading her home.

“I had been seeing him for many years when he asked me at one of my appointments if I missed clinic work,” she said. “I was working rehab at the time, and it was growing hard for me. I was 65, and it was getting to be, you know, physically demanding. I told him, ‘Yeah, some days I really do miss it.’”

As she left that appointment, Dr. Cooney informed her that she was heading in the wrong direction.

“I laughed and said, ‘I’ve been coming here long enough. I’m pretty sure I know how to find my way out.’ He said, ‘No, you have an interview right now.’ The rest is history, I guess.”

And to this day, her love for Methodist continues to grow.

“Everybody works together here. No matter if you’re in family medicine or internal medicine. I think that’s what I really like – especially about Indian Hills. We really hang in there with each other. We’re family.”

What Keeps Her Going

At 71 years old, Ernstmeyer has no plans of retirement.

“Not for a while,” she said. “I have a bigger fear of boredom than I do anything else. I don’t see why I shouldn’t keep doing what I love to do.”

Although a dream of coaching led her to nursing, “I guess it worked out,” she said. Because in her mind, the two are a lot alike. 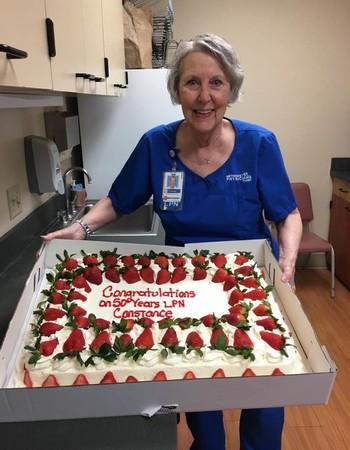 “It’s all about knowing how to get a person’s attention – how to get them to move forward. Sometimes people need a little encouragement – a tiny push here and there – and away they go! I think that’s the secret to both nursing and coaching.”

Ernstmeyer would certainly know such secret, as she somehow found time during her 50-year nursing career to coach girls basketball and softball through the YMCA.

“Yeah,” she said with laughter. “I did do some coaching after all.”

And whether she’s coaching patients or players, The Meaning of Care is something she’s always tried to impart.

“It’s about being there, being present, really listening and helping them follow through,” she said. “Sometimes it even requires a little tough love. But when somebody listens to the advice they’re given and makes significant improvements – when they do what they need to do to move forward – that’s what keeps me going. I like that. Because I know I got to be part of it.”