Chris Nadler, a stroke and melanoma survivor, has been a Methodist regular for the better part of the past decade.

“I’ve gotten extremely good care,” he said. “They listen. They don’t preach. Every facet I’ve had with them has been wonderful.”

After a recent diagnosis of atrial fibrillation, Chris experienced varying degrees of pain following two cardiac ablations and having a pacemaker implanted, including “severe pain” after a catheter ablation in May.

But instead of relying on pain medication alone, the 62-year-old Council Bluffs man trusted a nurse to complete a Healing Touch treatment – a nonpharmacological approach to pain management that Methodist offers. The gentle, nurturing, compassionate form of energy therapy aims to complement the body’s natural ability to heal.

“People are so caught up in, ‘I’m going to take a pill, and I’ll feel better,’” Chris said. “I think if people would understand what they can do without that, channeling their own energy through their bodies, I think it would help people. I know it helps me.”

For Kathy Svoboda, BSN, RN, who serves as one of 16 Healing Touch nurses at Methodist, the therapy is an extra tool that she can use to help distressed patients.

Chris met Svoboda in the Methodist Hospital cardiac unit following a heart surgery in March. He was meditating at the time, and she offered him an additional treatment to relieve pain that didn’t require more medication.

Svoboda explained that she was trained in Healing Touch. She knew a variety of techniques that involved either lightly touching or placing her hands just above certain areas of his body to help smooth out and balance energy within and around his body.

“I tell them it’s like the TelePatch that’s picking up your heart’s electrical system and posts it on the monitor to see,” she said. “I’m working in that energy field. And it helps to create restoration and alignment of the body and a sense of well-being.

“Energy is all around us. And I even tell them about the positive and negative electrons that are bouncing around creating energy all the time. I’m just working in that field to balance and unblock things that are causing pain, disease or emotional distress.”

Chris agreed to have the treatment done.

“I just started to relax immediately,” he said.

“It’s a rigorous, comprehensive program, with classes offered around the globe,” she said. “As a standardized continuing education program founded in professional nursing practice, it works well with Western medical care. It just goes along nicely with that great care that the patients are already getting at Methodist. And it helps facilitate their own healing.”

“We use a lot of medicines in order to help our patients, and there are a lot of treatment options, but our nonpharmacologic methods of treating pain or discomfort are limited,” Cunningham said. “And we want them to be more robust.”

Bies provided Healing Touch treatments in the Methodist Hospital cardiac unit for three months in early 2020. Pre- and post-ratings of anxiety, pain and nausea were documented for each patient. Many saw significant improvements in each category, and nearly all said that they would receive the treatment again.

Cunningham and Hall presented this information to Teri Bruening, MSN, RN-BC, CNE, Methodist Hospital’s vice president and chief nursing officer. Bruening fully supported a pilot program, which then led Cunningham and Hall to contact Methodist Hospital Foundation and ask for its backing. The Foundation agreed to provide funding for training and a six-month pilot program.

Tracy Madden-McMahon, president and chief executive officer of the Foundation, believes “it’s a great compliment” that Cunningham reached out and wanted to partner with the Foundation.

“This was something where there’s research and outcomes that show Healing Touch really works and can make a significant difference for our patients,” Madden-McMahon said. “So we’re grateful to have donors who are able to support it.”

During the six-month pilot, nurses completed Healing Touch on five to seven patients per shift and offered the treatment to other nurses. The nurses reported back to Cunningham and Hall after each shift with various stories about their interactions with patients.

After more than 200 treatments between October and March, nearly two-thirds of patients reported either improvement in their pain or fell asleep because of the treatment.

As the pilot program ended in April, Cunningham and Hall received approval from administration to hire a dedicated Healing Touch nurse who will be available for consultation 24 hours per week and drive education for the program.

“This will help with consistency for the program to have a specific person to go to for those who have questions about the program and to help develop the program even more,” Cunningham said.

While Cunningham and Hall work toward hiring a dedicated Healing Touch nurse, the treatment continues to be available during the hours established in the pilot program.

Methodist is one of several health care outlets to offer Healing Touch to patients.

“A Good Arrow in Your Quiver”

Thanks to the care he’s received at Methodist, Chris continues to enjoy making memories with his family and friends at Lake Manawa.

He believes Healing Touch is a great option that Methodist provides.

“It’s just a good arrow in your quiver to have,” Chris said. “I think that we’re so dependent on pills and medication for everything, but I really think that in our body we can do a lot for ourselves.”

Svoboda said that providing Healing Touch at Methodist is just another example of how the health system stands by The Meaning of Care.

“I’m really sympathetic, empathetic and caring, and it’s hard for me when I don’t have something I can do for my patients,” she said. “Before Healing Touch, it was very hard when they were in so much pain, and there wasn’t anything more I could do. Now, I can do this. And I see the results. And then I’m more at peace, too, seeing that they’re more at peace and without pain or suffering.” 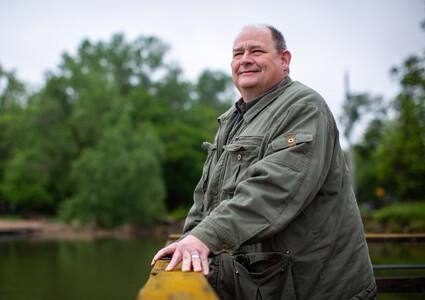