In 2002, after the death of 19-year-old Tyler Kahle to undiagnosed aortic dissection, the leadership of Methodist Health System made a promise to Tyler’s family to make changes that would prevent similar tragedies. Methodist developed a Chest Pain Center, changed clinical history intake forms and hardwired new protocols in place. Doing so has saved lives.

These internal changes are only part of the commitment made to Tyler’s mother, Debra Kahle McMillan. We also promised tell Tyler’s story, share lessons learned and advance change beyond our own walls. Working closely with Mrs. McMillan, who has become a strong patient advocate for improved diagnosis and treatment of thoracic aortic disease (TAD), Methodist continues to fulfill this commitment.

“Aortic Dissection at Any Age: The Tyler Kahle Story” 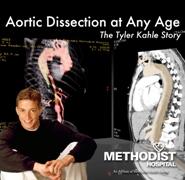 Methodist collaborated with Mrs. McMillan in producing the award-winning video “Aortic Dissection at Any Age: The Tyler Kahle Story” which has attained an online viewership extending to every U.S. state and more than 50 countries.

Thousands of DVD copies have been distributed to individuals and organizations, including all Nebraska emergency departments, the Institute for Healthcare Improvement, Iowa Healthcare Collaborative and National Marfan Foundation Emergency Medicine Campaign. The video has been presented by Methodist Health System staff, Mrs. McMillan and others at local, regional and national conferences, including the 2008 American Society for Healthcare Risk Management (ASHRM) Conference and 2009 American College of Emergency Physicians (ACEP) Scientific Assembly, where it was shown to 1,000 emergency physicians and emergency medicine leaders.

Together, Methodist and Mrs. McMillan continue to push for systemic change in all emergency departments, advocating adoption of the aortic dissection bundle developed by Anton Piskac, MD, vice president of performance improvement for Methodist Health System. The bundle includes a series of prompts to consider aortic dissection as a cause of life-threatening pain among at-risk populations, helping physicians to identify patients at increased risk of aortic aneurysm and dissection and to order appropriate tests.

Dr. Piskac explained, “At Methodist, we learned this lesson in the hardest, most tragic way by failing to listen to and act upon a family history of aortic dissection in a 19-year-old man with chest pain. Now we know that thoracic aortic dissection is a condition that affects patients of all ages, and that family history is among the risk factors that must be routinely determined for every patient presenting with chest pain or other symptoms of aortic disease.”

Bundle Adoption by Leading E.D. Software Providers
Dr. Piskac and Mrs. McMillan have made joint appeals to the CEOs of more than two dozen companies that produce emergency department information system software, urging them to modify their chest pain clinical decision templates to include the Methodist aortic dissection bundle.

Three of the five leading suppliers have adopted the bundle at our request — Cerner, McKesson and EpicCare —for enhanced clinical decision-making in the diagnosis of thoracic aortic dissection in their clients’ emergency rooms and chest pain centers nationwide. Methodist will continue urging other suppliers do the same.

In 2009, both accepted invitations to be part of a new Thoracic Aortic Disease (TAD) Coalition convened by the National Marfan Foundation and Dianna Milewicz, MD, PhD, the recognized authority in the genetics of thoracic aortic disease who is featured in the Tyler Kahle video.

Dr. Milewicz is professor and the President George H.W. Bush Chair in Cardiovascular Medicine at The University of Texas Health Science Center at Houston (UTHealth), director of the Division of Medical Genetics at The University of Texas Medical School at Houston, part of UTHealth and director of the John Ritter Research Program in Aortic and Vascular Diseases. Dr. Milewicz is also a member of the writing committee that developed the clinical guidelines for the diagnosis and management of thoracic aortic disease by the American Heart Association (AHA) and American College of Cardiology (ACC) in partnership with nine other professional organizations in 2010. 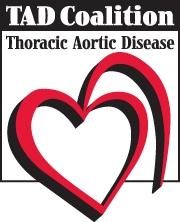 At the March 16, 2010 release of the new guidelines and announcement of the TAD Coalition’s campaign, Dr. Milewicz referenced Methodist’s key role. “The public awareness campaign being launched today is directed toward increasing awareness of the risk of aortic dissections to prevent premature deaths. It builds upon the successful campaign over the past few years by Nebraska Methodist Health System to increase awareness of aortic dissection among emergency room physicians,” Dr. Milewicz said.

New AHA-ACC Clinical Guidelines, Ritter Rules
The TAD Coalition is working in partnership with the American Heart Association and American College of Cardiology in support of the new AHA-ACC clinical guidelines for thoracic aortic disease. Building upon lessons learned from Tyler’s death, Methodist helped shape the emphasis of the Coalition’s newly released “Ritter Rules,” lifesaving reminders of what medical science has learned about the risk, symptoms, medical testing and urgency of aortic dissection. Ritter Rules are named for the late actor John Ritter, who died in 2003 of a thoracic aortic dissection.

Dr. Piskac described the new clinical guidelines and Ritter Rules as important steps forward that are in keeping with the aortic dissection bundle and Methodist’s commitment to Mrs. McMillan. “We hope that the publicity surrounding the release of Ritter Rules will raise public awareness, and will work to accelerate acceptance of the new clinical guidelines. We want front-line providers to routinely determine TAD risk factors when they are faced with situations like Tyler’s to prevent further deaths from aortic dissection.”

Tyler’s Legacy: Lifesaving Change
Looking back over the years of collaboration that began after Tyler’s death, Mrs. McMillan said, “Our family has been very pleased with Methodist's action in making systemic changes in the treatment of aortic disease. They have been faithful in their pledge to us to improve the education of their staff about aortic dissection. They have changed their emergency department intake forms to better identify those at risk and shared those changes regionally and nationally at various conferences. They have also arranged opportunities for me to share Tyler's story. Their involvement with the TAD Coalition is further confirmation of their sincerity in wanting to change how medicine is practiced so that lives can be saved.”

Dr. Piskac said, “We are deeply honored to have the opportunity to work together with Mrs. McMillan. On behalf of Methodist Health System, I want to thank Mrs. McMillan for her patient advocacy and continued efforts to raise awareness and speed the changes necessary to prevent further tragedies.”