Where Are They Now? See the Jones Quad Squad 5 Years Later

Ezinne and Andrew Jones’ journey to parenthood began with heartbreak.
After suffering three miscarriages, Ezinne became pregnant with triplets under the care of reproductive endocrinologist Carolyn Maud Doherty, MD, with Methodist Reproductive Health Specialists. But at 20 weeks, one of the babies began passing through the cervix, and Ezinne was hospitalized as her care team tried to delay labor. Sadly, after two weeks, one baby was delivered stillborn, and the other two babies died shortly after birth.
“I didn’t want to give up, so we ended up trying again," Ezinne said.
Ezinne struggled to conceive naturally due to polycystic ovary syndrome and low progesterone levels, but she and Andrew were determined to be parents. A few months after losing the triplets, they returned to Dr. Doherty, and Ezinne became pregnant with a baby boy. Under the care of Methodist Women’s Hospital maternal-fetal medicine specialist Robert Bonebrake, MD, Ezinne and Andrew joyfully welcomed son Maximus (Max) in 2011. They had no idea their family was just getting started.

Trying for One More – and Getting Four

When Max was 3, Ezinne miscarried again after conceiving without fertility treatments. She had always pictured having more than one child, but at the time, she and Andrew were deciding what to do first – have another child or buy a new house. They chose to go for one more baby and resumed fertility treatments under Dr. Doherty.

“And that’s when we got pregnant with the quads,” Ezinne said.

Even after the tragic loss of her triplets, she wasn’t afraid to be pregnant with multiples. But she had never considered the possibility of quadruplets. And after an initial pregnancy test came back negative, she didn’t even think one more baby was possible.

“I remember that was a really somber moment because it was our last attempt,” Ezinne said. “I was grateful for my son, but I was mourning the idea of not having more kids.”

She was surprised when a pregnancy test was positive the next day and surprised again when Dr. Doherty told her in her six-week ultrasound that she saw three heartbeats and anticipated a fourth.

“Even then, I just didn’t believe it could be four,” Ezinne said. 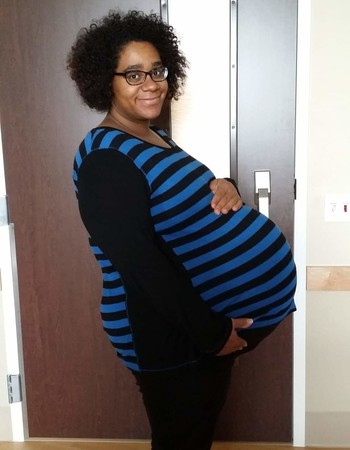 As a coping mechanism, she went into planning mode and numbed her feelings. After the loss of the triplets, Andrew and their families had fears over her carrying multiples.

Part of her planning was making an appointment with Dr. Bonebrake as soon as possible. When the topic of reduction came up, he already knew how Ezinne felt.

With the help of her husband, mother and mother-in-law, Ezinne was able to focus on having a healthy pregnancy and made it to 31 weeks before checking into Methodist Women’s Hospital for monitoring. After a little over two weeks on bed rest, Ezinne was adjusting well. But a cesarean section was scheduled for the following week.

“I remember telling the doctor that morning: ‘Let’s just cancel that. Let’s just see how long we can keep them in.’ I had breakfast, and the TV was on. I didn’t have cable at home,” she said with a laugh.

What followed that first week after delivery was harder than anything Ezinne experienced during pregnancy. The C-section was difficult on her body, and she became ill. And she didn’t get to see her babies for the first time until late that evening.

“That was the hardest part honestly – being separated from them,” she said.

But she describes finally seeing the quadruplets for the first time as “awesome.”

Between hormonal changes, recovering from the C-section and fighting off a small infection, Ezinne leaned on the Methodist Women’s Hospital Neonatal Intensive Care Unit (NICU) nurses and staff.

“They were in such good care,” she said. “I wasn’t worried for them at all. Everyone was so loving and kind to my kids and me. Those first few days were just so hard. Mentally and physically, I was wrecked.”

Three weeks after birth, Leonidas (Leo) was the first home. Kayla went home two days later, and Arya a day after that. Thomas (Tommy) needed two extra weeks in the NICU, but then, finally, all four babies were home with Mom, Dad and big brother Max.

Ezinne described the chaos in her mind leading up to the quadruplets coming home, questioning how she and her husband were going to do four of everything – feedings, diaper changes, baths and more.

“And then when they finally were all home, they were such good babies,” she said.

The quadruplets never had colic, they stayed on their feeding and sleeping schedules, and by 5 months old, they were sleeping through the night. After so much loss, Ezinne and Andrew were blessed with four “really good babies” that met milestone after milestone.

Today, the quadruplets are 5 years old and starting kindergarten in the fall.

“They are so different,” Ezinne said. “I remember hoping and praying that they could be identical. Let’s be real – identical multiples are just cool. But I didn’t realize how much I’d love celebrating their differences.”

Arya, named for the “Game of Thrones” character, is the princess. She’s assertive, confident and “thinks she’s royalty.” Kayla, named for her grandmothers, is the silly one. She goes out of her way to make everyone laugh and smile. Tommy is the typical boy. His favorite color is blue, he likes building things, and he loves superheroes.

Leo, said Ezinne, is her “intellectual sweetie pie.” He’s observant and kind, and he taught himself how to read – seriously. Ezinne made the discovery last summer when Leo read a restaurant sign out loud. When they got home, she dug out books she knew he hadn’t seen in years, and he began reading to her.

The family has had their ups and downs over the last five years. Both Leo and Max, who is now 9, have been diagnosed with autism spectrum disorder (ASD). Max was diagnosed shortly after the quads were born, and he recently graduated from therapy. Because of Max’s diagnosis, Ezinne and Andrew were able to catch the signs in Leo early and start him in therapy even younger.

Perhaps the biggest surprise since the quads were born was the addition of Baby No. 6 – Daisy Luna, born in 2017. Ezinne was just about to start birth control when she got the shock that she was pregnant and almost through the first trimester. Daisy, now 2, likes to say she’s a quadruplet, too.

“We have so much to be thankful for,” Ezinne said. “It’s really hard having a lot of kids. You’re basically living to serve them. I’m thankful not only for the health and safety of my children but also that my husband is able to provide for all of us. That we have such a huge support system. We’re so blessed to have our family all here. I couldn’t have survived this without my family.”

Ezinne says that having quadruplets humbled her.

“You really have to open yourself up to the help of others,” she said. “We had to rely on our family and friends. We didn’t ask for help, but we learned to accept it from the people who offered it.”

She also learned to give herself grace when parenting doesn’t quite go as planned.

“The place is a mess? We’ll pick it up later,” she said. “Or my kids are eating chicken nuggets and French fries for the second time in a week? But … they’re fed!”

She’s grateful to everyone who cared for her and her children at Methodist Women’s Hospital through the years. From the nurse who helped her and her husband through the loss of the triplets to Dr. Doherty, who stood by their side try after try.

And she has special praise for the physicians of the Methodist Women’s Hospital Perinatal Center.

“I’ve seen just about all of them,” she said. “Dr. Bonebrake delivered five of my kids. Dr. Lovgren delivered Daisy. Dr. Robertson delivered the triplets. Everyone was amazing with us through our time there. I wish everyone could go through them, and not just high-risk patients, because they’re so good at what they do.”

Through the teamwork and compassion of those at Methodist Women’s Hospital, Ezinne and Andrew became the parents of six in less than a decade. Their focus now is providing an environment where their children can explore what they want to do with their lives, grow up contributing to society and be happy.

“I want them to grow up to be happy adults,” Ezinne said. “That’s all we can really hope for. They’re happy kids.”