“Ruby was conceived the day I proposed. We know that for a fact,” Rodney Bender said. “We were in Vegas.”

His fiancée, Jen Schellen, covered her mouth in embarrassment as she laughed.

Ruby, now 3, is loud, bossy and full of personality, but when it comes to photos? 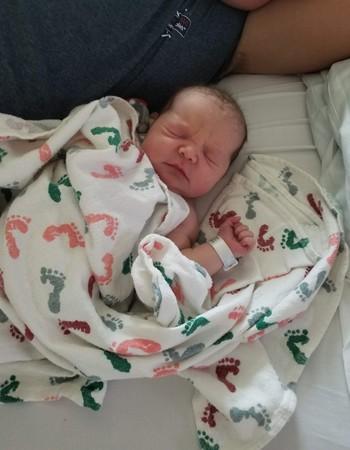 “She always hides,” said Jen, who still refuses to stop taking them.

If this year has taught her anything, it’s that each photo of her children, each captured moment in time, is worth so much more than a thousand words. Like the photo of Ruby right after she was born at Methodist Women’s Hospital. It marked the end of a beautiful pregnancy and birth experience, Jen said.

Last year, with that memory still fresh on their minds, Rodney suggested they have another baby.

“And it was off to the races,” he said as more laughter ensued.

The Beginning of a Heartbreaking Journey

Jen, 38, and Rodney, 42, are proud of their blended family of seven. But the thought of having a second child together was “so special,” he said. And when they found out they were expecting another baby girl, they were shocked and elated.

Although Jen’s age deemed her pregnancy high-risk and qualified her for regular visits at the Methodist Hospital Perinatal Center, the first several weeks of pregnancy were “smooth sailing,” she said. But her care team, including OB/GYN Rebecca Jacobi, MD, determined that intervention was necessary at 19 weeks.

She was admitted to Methodist Women’s Hospital with the goal of making it at least 11 more days – when Baby’s chances of survival would significantly improve. But during the first night of Jen’s hospital stay, her water broke prematurely.

“They told me, ‘Dr. Jacobi is on her way in.’ And that’s when I knew it probably wasn’t going to be OK,” Jen said.

Jen quickly became ill, spiking a fever and showing other signs of a serious bacterial infection.

Saying Goodbye With the Help of ‘Beautiful People’ 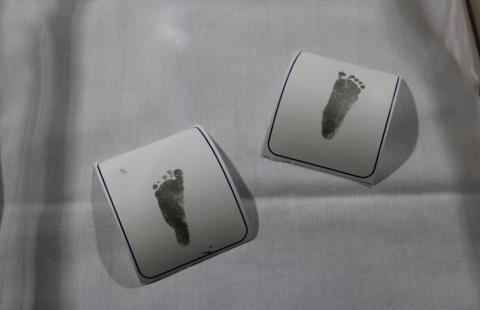 “We held her, and she was just so fragile,” Rodney said. “The side of her face was real bruised and swollen – I guess from lack of fluid. But she was so pretty. And they reassured us that she wasn’t suffering. We could see her little heart beating, but they reminded us that she wasn’t breathing because her lungs weren’t developed yet. She just laid there so perfectly. They wrapped her up for us, and we got to love on her for…”

“One hour and 50 minutes,” Jen chimed in with certainty.

It was in that nearly two-hour timeframe that she and Rodney realized they were in “the best place for babies … or not,” the tearful mother said as she recalled a moment with Dr. Jacobi she won’t soon forget.

“She came over after I had delivered Charley. She grabbed my hand and said, ‘I wish there was more that I could have done.’ But the truth is she did everything I needed her to do. She was so calm. She’s just – they’re all just beautiful people.”

The other “beautiful people” Jen credits include maternal-fetal medicine specialist Robert Bonebrake, MD, who made it a point to stay by the couple’s side all night.

“He told me over and over again that nothing I did or didn’t do caused this to happen,” Jen said. “And as a mother, you have to be reassured of that. Because that’s always in the back of your mind.”

Jen and Rodney were also impressed with the hospital staff members who helped make a baptism possible before placing a white flower outside the couple’s door – a sign that their room was special.

“Because people don’t know,” Rodney explained. “Other families there are experiencing a lot of joy. People assume if you’re there, you had a baby. They don’t understand your circumstances. So to make others aware – that was incredible.”

“And then the compassion and empathy that followed from the doctors, the nurses, even the people who bring you your food. Everyone knew, and no one skipped a beat,” Jen said.

And finally, Jen and Rodney credit high-risk OB nurse Jasye Morrison, BSN, RN, who stepped in to give them one of the last things on their minds at the time: photos of their baby girl before her passing.

“The amount of emotion in those pictures is something you need to remember,” Jen said. “It’s part of the grieving process.” 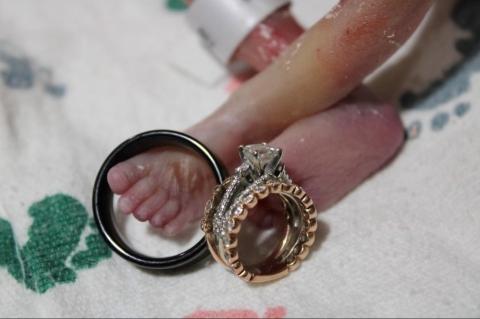 Morrison is the daughter of labor and delivery nurse Denise Morrison, BSN, RN – another valued member of Jen and Rodney’s care team. Regardless of having her own mother as a colleague, Morrison said it’s always a family-helping-family approach at Methodist Women’s Hospital – especially for the hard cases.

“Whether it’s a case we’re celebrating or a case we’re grieving, it’s always such a vulnerable time in your patients’ lives that it becomes automatic – that connection,” said Morrison, who had never taken such photos before. “You just help wherever you can. You do whatever you can. Given this situation, it was hard to focus the camera in my shaking hands. But I knew they probably weren’t going to remember this moment or that, and I knew I had one opportunity to give this family something they could keep going back to.”

Giving Back and Continued Healing

Two months after saying their hardest goodbyes yet, Jen and Rodney felt compelled to help other families through the same kind of pain and anguish.

Thanks to their generous cash donation to Methodist Hospital Foundation, other families who are forced to return home without their babies will receive a USB drive full of staff photography that captures their final moments together. The USB drive will also come with a special wooden case. 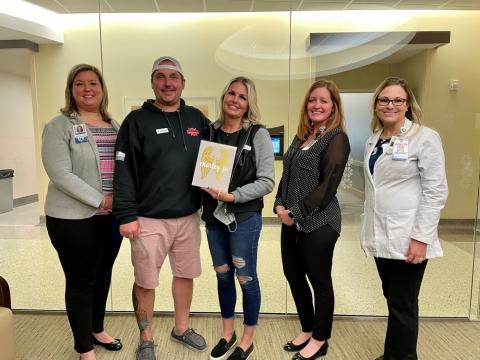 “We want to make sure she had a positive impact on other families like hers,” Jen said. “I think it was just part of her purpose – to let other families know they’re not alone and that their baby is now safe with ours.”

Healing for them, too, Rodney said, is the thought of giving back to the place and the people who showed them so much beauty during so much heartbreak.

“To show true care and compassion, I think you need to really go there,” Rodney said. “You need to sit in it with them on their level and take it in. Take it all in. There’s no way we could name everyone, but everyone was able to do that for us. While we were here and going through this, so were they. You could see it on their faces and feel it in their presence. This place was made for a reason. Women. Babies. The Meaning of Care. You can tell you guys stand by it. It shows in everything you do.”