On a picture-perfect autumn morning, Tammy Kroft drove her husband, Jordan, and three children in their souped-up Ford Mustang to Pawnee Park in Columbus, Nebraska.

They leisurely cruised the park, enjoyed the playground and took in the early fall breeze. But for the Krofts, those simple joys were unimaginable 13 months before. That’s when Tammy, who had weighed 377 pounds and faced a host of serious health challenges, became a patient in the Methodist bariatric program. It was her last resort, she said.

“I was just so close to death,” Tammy said. “We didn’t know if I was going to wake up the next day. I was so close to just giving up. Just done.”

Tammy, 48, wasn’t overweight as a child, but she also didn’t have a good foundation for proper eating habits. When she left home as a teen – and was free to make her own food choices – she began gaining weight and eventually developed diabetes. Her weight gain continued during and after her first pregnancy, which was also marked by severe swelling, blood sugar issues and the first signs of heart failure.

Despite those challenges and the end of her first marriage, Tammy kept a positive outlook. In time, she met Jordan at the restaurant where they worked.

Jordan remembers a whirlwind of emotions.

“When I saw her for the first time, her attitude just spilled from her,” he said. “She was so full of life.”

It didn’t hurt that she loved cars, the self-described gearhead said. On one of their first dates, Tammy picked him up in a Ford Mustang GT.

“The butterflies got more intense then, because this woman can drive,” he said. “She can launch a car. This lady was like a drag racer’s dream. That was it. After I’d seen that and experienced her wonderful attitude and the feelings she made me feel inside, that was it. I knew right there and then.”

Two more children followed – and so did more weight and health issues. Only now the effects were seriously affecting Tammy’s quality of life. She was maxed out on insulin, but her diabetes was out of control. She had developed kidney failure and blood pressure issues. And in a vicious cycle, her swollen legs, debilitating back pain and increasing weight limited her mobility, only compounding her challenges. The best efforts of her primary care provider and a diabetes specialist didn’t seem to be helping. By 2020, she couldn’t even walk to the mailbox.

But worst of all, Tammy said, was the hopelessness and depression that had set in. As uncertain as her future was, she was more worried about not being there for her children, or what might happen to her marriage.

“I was afraid Jordan was going to give up on me, which he never did, but that’s how you feel,” she said.

Said Jordan: “It broke my heart watching that happen to her. Leaving or giving up was never an option – it never even crossed my mind. But I didn’t know what to do to help. That was probably the hardest part, feeling helpless.”

Then, in Tammy’s darkest moments, a light appeared. A friend told her about the bariatric program at Methodist.

“She said, ‘It changed my life, and it will change yours.’”

“For the Long Term”

“We don’t do any short-term fixes,” said program coordinator Ali Hunter, APRN. “This is for the long term. It’s really about building that relationship. We view it as a partnership. We’re worried about people five to 10 years down the road, not just six months after surgery.”

The partnership begins with plenty of behind-the-scenes work, including reviewing benefits and insurance requirements and undergoing a psychological evaluation. Patients also start what surgeon Brad Winterstein, MD, calls “prehabbing.” They’ll meet with Hunter for nutrition and medical weight management counseling that can help them get to a weight or body mass index (BMI) that’s safe for surgery while setting the foundation for postoperative success. They’ll also discuss with Winterstein or surgeon Thomas White, MD, which of four surgical options is appropriate. About 80% of Methodist patients undergoing surgery have a laparoscopic sleeve gastrectomy, where about three-quarters of the stomach is removed, reducing the amount of food that can be comfortably eaten.

The preparation generally takes three to six months, and it’s a formula that leads to patient and program success. Since Dr. White and physician assistant Angie Connors, PA-C, MPAS, joined the program in early 2019, it’s roughly doubled its number of patients and is on track for over 100 surgeries this year. Even as the number of cases rises, the focus remains on quality.

“You see the lengths that we go to in making them ideal candidates prior to surgery, and then the long-lasting effects, not only in their weight loss, but their health overall,” Dr. Winterstein said. “That’s the quality. It’s not just about a safe operation.”

In fact, for some patients, there is no operation. About a fifth of the program’s patients are so successful losing weight with Hunter’s help that they opt to forego surgery – the best possible outcome.

“If we can get somebody through without surgery, that’s what we would prefer,” Hunter said. 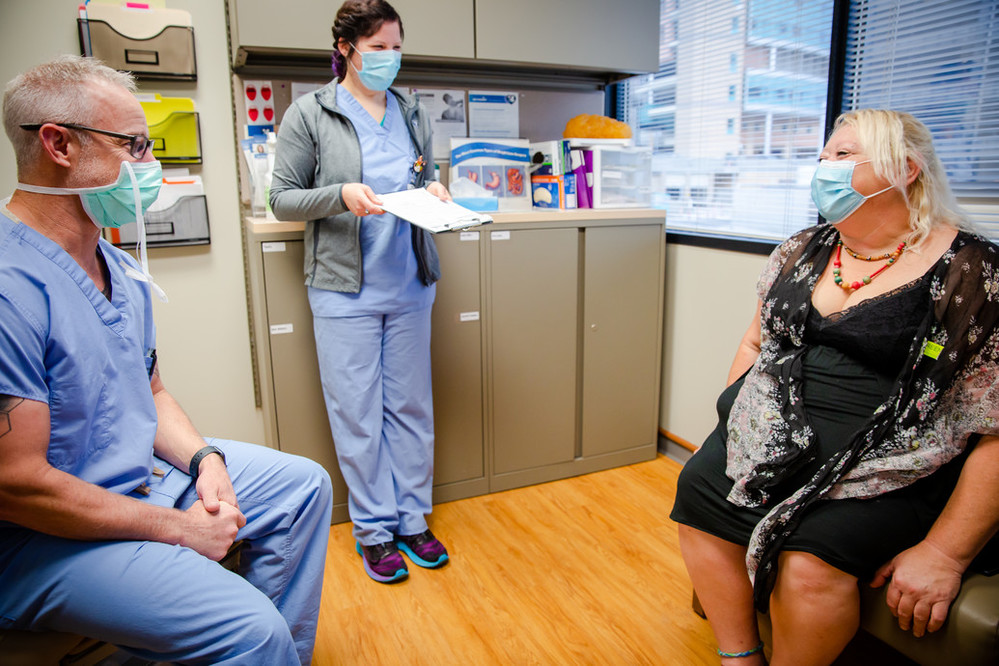 With her life spiraling out of control, Tammy knew she had to contact the bariatric program. Still, taking that step in August 2020 was incredibly difficult.

“I was embarrassed. Very embarrassed,” she said. “It’s hard to go in there and say, ‘Hello, I’m fat and need help.’ I was scared. I didn’t know what was going to happen, but it was that or die.”

Her fears were soon put to rest. The environment she found was welcoming, free of judgment and committed to finding solutions. Most important of all: “They believed me,” she said.

“The unfortunate reality of patients with morbid obesity is that everyone just thinks that they overeat and don’t really care about what they do,” Dr. Winterstein said. “I would say 50 percent of the people we see don’t really overeat, and no one believes them. We do. We see it all the time. We’ve had people that have to eat more because they’ve been so chronically undernourished.”

He added: “The big thing in Tammy’s case was that we focused on the importance of not just how we eat, but how we live our lives.”

In the months that followed, the program helped Tammy quit smoking, improve her sleep habits, adjust her diet and become more active. Hunter and Dr. Winterstein also partnered with Tammy’s doctor to adjust her diabetes medications. Tammy began losing weight, but the bigger focus was lowering her blood sugar to make her a better surgical candidate and instilling the healthy habits she’d need after the procedure.

“She had a great attitude,” Hunter said. “She did everything we asked and more, and she had a smile on her face the entire time.”

The hard work paid off, and on July 21, Tammy underwent a laparoscopic sleeve gastrectomy with Dr. Winterstein. Her life would forever be transformed.

“The Sky’s the Limit”

Tammy and her family drove to Omaha in early September for her six-week checkup – the second in a series of follow-ups that continue for life. She was delighted as a nurse told her she now weighed 310 pounds. But changes beyond the scale were even more exciting.

After struggling with diabetes for over 20 years, she finally had control of the disease and was off of insulin. And she was doing things she hadn’t in years: working around the house, going to the park with her family, fitting behind the wheel of her Mustang and making plans for the future. Ultimately, Tammy would like to get her weight to about 200 pounds. But her short-term goal is to get to 250 so she can resume another one of her passions: horseback riding. By early November, the goal was in sight – she weighed 266 pounds.

Her newfound energy and positive attitude have her family beaming, thrilled to have back the wife and mother they used to know.

“It’s like opening up a time capsule and finding everything you could imagine would be in there and then a lot of extra stuff,” Jordan said. “That sunlight just pours out of her now.”

While Hunter and Dr. Winterstein are pleased with Tammy’s weight loss, it’s all the other changes in her life that they’re most proud of.

“That’s why we do this,” Dr. Winterstein said. “It’s not just to lose weight. It’s really to be able to allow patients to realize their full potential and start living life. Once you free them up to really live life again, the sky’s the limit.”

“I can’t wait to see what happens next.”