His colleague Guillermo Huerta, MD, says it’s “huge for innovation” and a testament to Methodist Health System’s drive to offer the best, most advanced care.

Methodist became the first health system in the region to begin using the Ion by Intuitive robotic-assisted biopsy system this summer. In the months since, providers have been abuzz with excitement because of Ion’s ability to access smaller and harder-to-reach lung masses, known as nodules – and for how the technique can pair with robotic surgery technology to remove them if they prove cancerous.

For patient Phyllis Huffman of Omaha, Ion brought curiosity and fascination, then peace of mind. Phyllis, 82, has survived endometrial cancer and thyroid cancer, and she lost her husband, Gene, to metastatic prostate and bladder cancer in 2020. So when she learned last spring that she had a suspicious lung nodule, she was ready to be one of the first patients in the area to benefit from the Ion technology.

“I was a medical technologist,” Phyllis said. “I’m very interested in medicine. I thought, ‘Wow, this really is cutting edge.’ This is the newest and the best, and I’m glad I’m part of it.”

Dr. Huerta said he couldn’t have imagined anything like the Ion system when he began practicing pulmonology in 1991.

“No, not 30 years ago. We still had a brick cellphone,” he said. “We always looked and hoped that innovation would keep moving the ball forward, but we had no idea that it would look anything like it does today.”

Even before acquiring the Ion system at Methodist Hospital and Methodist Jennie Edmundson Hospital, the health system was pushing ahead to identify and treat lung cancer sooner – before it spreads to a patient’s lymph nodes.

“The importance of them finding these earlier and being more aggressive about them is about survival," Dr. Mukherjee said. "The numbers are really very clear that once the lymph nodes are involved, you go from a very good five-year survival rate to a very poor five-year survival rate. We really want to capture them before those lymph nodes are involved and the spots are very small.”

Methodist’s efforts include low-dose computed tomography (CT) scans, which look for nodules in people who are at risk for lung cancer but asymptomatic.

And when a concerning nodule is identified, patients benefit from a weekly lung cancer clinic at Methodist Hospital and the close collaboration of specialists at Methodist Jennie Edmundson Hospital. These efforts aim to go on the attack sooner by bringing experts together, allowing potentially lifesaving treatment – often radiation or surgery – to begin faster.

Still, locating a nodule and confirming that it’s cancerous – or not – are two different things. One biopsy method, inserting a CT-guided needle through a patient’s rib cage, can cause a collapsed lung and other complications. In a more invasive method, a surgeon could make an incision through the ribs to access a nodule, but this approach requires a breathing tube and hospital stay. Methodist providers also have the option of using a CT scan to map a patient’s lungs, then performing a bronchoscopy to guide a small tube through their airway en route to the nodule. The drawbacks of these approaches: Some detected nodules are too small or too difficult to reach, and others may be too risky because of their proximity to a blood vessel or chamber of the heart. In those cases, providers could only take a wait-and-see approach.

“Fighting lung cancer for so long has been limited by access,” Dr. Mukherjee said. “We’ve had spots in the lungs that we had this suspicion that cancer was growing, but a lot of our patients are just so high-risk. They just wouldn’t tolerate a traditional biopsy well.” 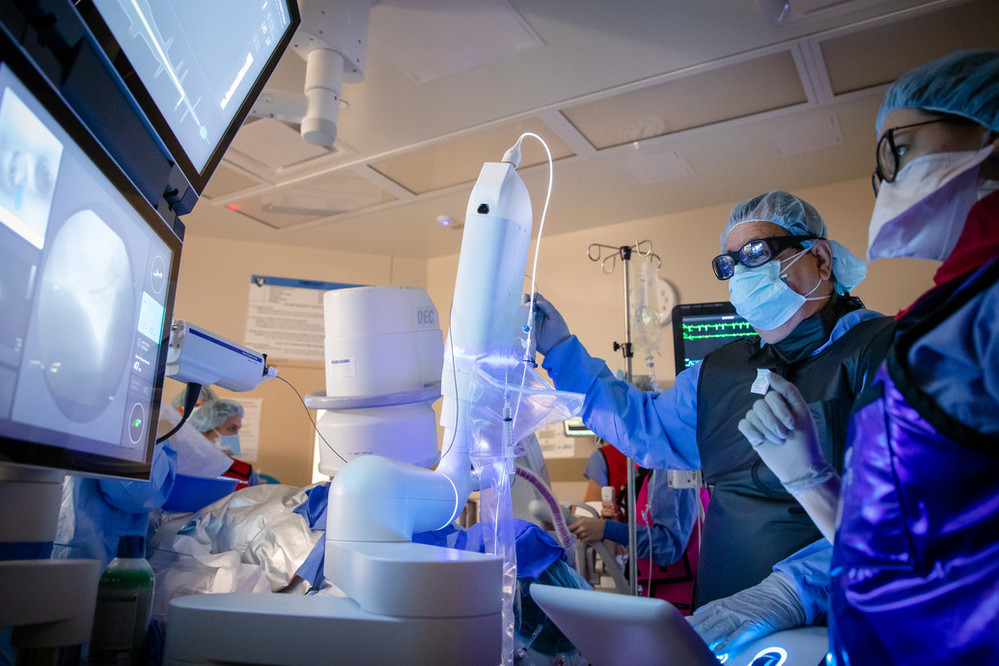 The system’s software pairs with a CT scan to create an enhanced 3D visualization of the patient’s lungs and allow a pulmonologist to map a preplanned route to a nodule. Then, during a bronchoscopy, they can use the Ion controller to guide an ultra-thin, flexible catheter to the site of the nodule – often in places previous methods couldn’t reach. Once the catheter is locked in place, a biopsy can take place.

Dr. Mukherjee likens the system to suddenly being able to go off road to reach a remote destination.

“You’ve got a spot in your lung, and there are the main roads that go to that spot,” he said. “Historically, we can take little catheters and travel down that main road. But what if the spot isn’t on the main road? Now we can travel off road to get to that spot.”

“It will allow us to biopsy areas that we otherwise might not have pursued because of our confidence in getting to them safely and effectively,” Dr. Wells said. “The downstream benefit of that being, whatever it is we’re biopsying, and God forbid it’s cancer, then we’ve found it earlier than before, which hopefully means a cure.”

That’s where another state-of-the-art technology – and another Methodist first – comes in.

After a pulmonologist obtains a tissue sample, it’s immediately sent for testing. If it’s cancerous and can be treated surgically, cardiothoracic surgeons HelenMari Merritt-Genore, DO, and John Batter, MD, can use the da Vinci XI robotic-assisted surgical system to remove the nodule.

Methodist surgeons have long performed robotic-assisted surgery to offer patients a less invasive experience – resulting in smaller incisions, less pain and possible complications, and reduced hospital stays – while improving their own precision and access to areas of concern. Now those benefits are being paired with Ion to identify and treat lung cancer faster than ever. The dramatic reduction in time from diagnosis to treatment – now less than a day – “is pretty darn cool,” Dr. Merritt said.

“The big thing from our standpoint is that you can have a robotic approach from both your diagnostic procedure all the way through your treatment,” she said. “Right now we’re the only ones who are able to offer that full approach with robotic technology. It’s really exciting to be the first in the region to be able to offer that to the patient.”

Phyllis and her husband, Gene, were married for nearly 57 years and had two children. She’s always been a do-it-yourselfer, and she’s cared for guinea pigs since her children were little. After she and her husband retired, they traveled extensively in their camper. But Gene died in 2020 as the COVID-19 pandemic was beginning.

“It was a pretty lonely time for me,” she said.

But she kept busy caring for two guinea pigs, gardening and feeding the birds outside her home.

Even with her own cancer history, Phyllis’ kidneys were most concerning to her primary care provider last spring. Phyllis’ lab numbers didn’t look good, and her mother and sister had died from kidney failure, so she had a CT scan of her abdomen in April. The scan picked up the lower portion of her lungs and showed a nodule. After a follow-up scan a few months later, her doctor had her get a positron emission tomography (PET) scan at Methodist Hospital, then referred her to the Methodist pulmonology team.

Phyllis remembers Dr. Huerta telling her in August that the nodule was “hot,” or metabolically active. He was concerned it might be cancer, and he wanted to get a biopsy. She was optimistic but wanted to take no chances.

“If you can get something early, why ignore it before it spreads and takes over your life?” she said. “So, yes, I was ready. And my thought all along is, ‘It’s not cancer.’"

Dr. Huerta had a different view, telling her: "As far as I’m concerned, they’re all cancer until proven otherwise."

It’s a phrase he uses frequently. And there’s something else he tells his patients: “It may be cancer. It may not be cancer. But I’m going to be tenacious in my approach to get an answer.”

Phyllis assumed she’d soon undergo a needle biopsy, but Dr. Huerta shared the exciting news that Methodist had started using the Ion system and explained how it worked.

Less than three weeks later, Dr. Huerta used the technology to get a tissue sample.

“Not Ready To Leave”

Five days after her biopsy, Phyllis got the good news. Her nodule was considered an inflammatory lesion – not cancer. No action was necessary, and Dr. Huerta would review a follow-up CT scan in six months.

“Thank God,” Phyllis thought. “My children will be so glad to hear that.”

Dr. Huerta was just as thrilled.

“Giving someone the news that what we biopsied was inflammatory and not cancer was relieving and uplifting,” he said. “It gives you some peace. No cancer is the best cancer, to borrow an expression.”

In the weeks after the procedure, Phyllis experienced some minor throat irritation and coughing – not unusual for a patient following a bronchoscopy. But she also had peace of mind, and she was ready to get back to doing the things she loves.

“I wasn’t worried about the procedure,” she said. “After everything in the last two years, just go for it. I’m not ready to leave here. I’ve got more flowers to plant. More guinea pigs to love.”