‘Andrea Showed Us the Way’: Cardiac Nurse Recognized for Calming Patient With Dementia

“He didn’t know where he was or what was going on,” cardiac nurse Andrea Thomas, BSN, RN, said of her patient Richard “Dick” Stemm. “He wanted to leave, and he made every effort to do so.”

Although Dick, a 74-year-old retired physician, was admitted to Methodist Hospital in December for atrial fibrillation and other heart issues, Thomas knew that his dementia needed to be addressed first.

“He kept saying things like, ‘I’m leaving. I appreciate the interest, but I don’t want the job. You’ll have to find someone else,’” Thomas recalled. “With his medical background, I could tell he recognized he was in a hospital setting, but it was like he thought he was there for a job interview.”

“It was the first time any of us had really seen the dementia taking place in such an outward exhibition,” said Kathryn Stemm, Dick’s wife of 20 years. “So, we didn’t have any tried-and-true tips to help him in that really frightening moment. Thankfully, Andrea showed us the way.”

Dick’s medical knowledge gave Thomas an idea. She sprang into action to establish a quick connection with her patient by showing him his “extremely elevated” heart rate.

“I said, ‘This seems really high to me, but what do you think?’ And he would say, ‘Oh, yes. That’s way too high. That needs to come down immediately.’ So I looked at him in the eyes and said, ‘Hey, I agree. And that’s your heart rate. That’s why you’re here. We need to get your heart rate down. What do you say we sit down and try to work on that?’”

“It was truly amazing,” Kathryn said. “Her calm manner and the skills she used somehow soothed him enough to where he settled down. And he bonded with her over the next few days. In fact, a lot of times, he’d ask, ‘Where’s Andrea?’”

“There were times I’d just sit in the room with him,” Thomas said. “We talked about his children. We talked about him. We talked about his life and everything he remembered about it. I remember thinking, ‘I have no idea if these stories are true or not, but I have to live in his present – whatever that present time might be.’ That’s how I was going to keep him calm – just listening to him, talking to him.” 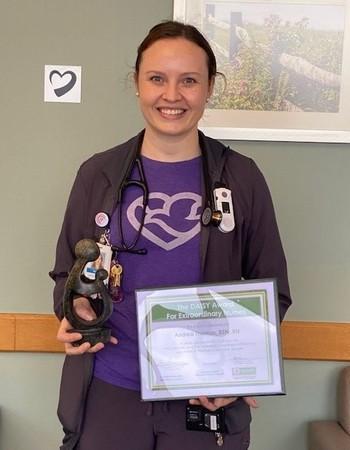 For Kathryn, Dick’s weeklong hospital stay was marked by several highs and lows – and several trips to the Cardiac Unit’s coffee station. That’s where she saw a flyer promoting The DAISY Award, a national honor that recognizes extraordinary nurses.

It only made sense to nominate “a true godsend,” Kathryn said.

“There’s a lot of fear when it comes to his dementia and that demonstrative behavior that he showed in the hospital,” Kathryn said. “Because it’s telling me that life is no longer as it once was. It’s this new chapter – a frightening journey, and I have no idea how it’s going to progress. But in that moment, when I didn’t know what to do or how to help him, she was a welcome gift.”

Receiving the award last month was a gift in return, said Thomas, a Nebraska Methodist College nursing graduate who’s now pursuing an advanced degree. The Arizona native is set to become a nurse practitioner with Methodist’s cardiothoracic surgery program in August, and although the idea of returning home has crossed her mind, she said this recognition solidifies that she’s where she belongs. 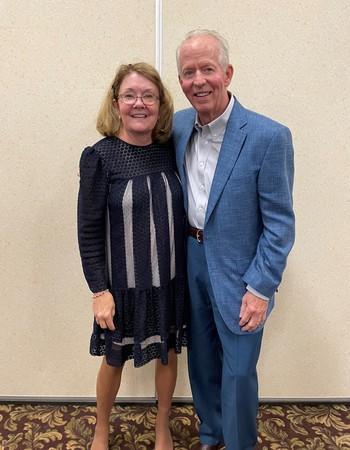 “There are so many nurses here that deserve this award,” she said. “Because there are so many nurses here that constantly put themselves in their patients’ shoes. In that moment, my patient needed medical care. But he also needed something else. He needed someone to talk to. And I think that’s what The Meaning of Care is – looking at the patient as a whole person and addressing all their needs, not just the medical ones.”

“It’s feeling safe and secure while getting the care you need,” added Kathryn, who’s looking forward to another 20-plus years with the love of her life, no matter what those years might look like.

“He’s an amazing man. I wouldn’t say that all the time, but this morning he’s being amazing,” Kathryn jested, well aware that Dick could hear her from the next room. “Oh, he just said to be sure and thank her again.”