Maysen Lake didn’t expect to deliver her first child at 34 weeks. But she found herself at Methodist Women’s Hospital in February after being diagnosed with preeclampsia and learning that her liver enzymes were at dangerously high levels.

When Maysen, 27, gave birth to her son, Mac, on Feb. 23, he was unresponsive for nearly a minute and then had difficulty breathing, which prompted staff to send him to the Neonatal Intensive Care Unit (NICU). And Maysen wouldn’t be able to see Mac for the first 24 hours of his life because she was on a magnesium drip.

Thanks to the education and support provided by NICU staff, the overwhelmed couple soon felt confident and comfortable.

“It’s really cool to watch these parents go from scared to touch their baby to ‘I got it!’” said Virginia O’Malley, BSN, RN, one of Mac’s NICU nurses. “‘I can change their diaper. I’m going to swaddle them just like you showed me. And I’m going to pick them up and hold them and snuggle them.’ It’s really amazing to see the transition between all of that.”

Maysen, Jim and baby Mac spent 19 days in the NICU before he passed the car seat test and doctors gave him the all clear to head home.

Maysen recalls “freaking out” before pulling out of the parking lot and heading home to Logan, Iowa, because they were about to leave the hospital where they had support at a moment’s notice.

“We provide a lot of reassurance and do a lot of hand-holding,” Thamer said. “But oftentimes parents wish that we could go home with them when they leave the hospital because we are their support net.”

Throughout the nearly three-week experience, nurses equipped both Maysen and Jim with skills to take care of Mac. They learned tips and tricks on how to feed him, change his diapers and clothes, transport him in and out of his crib, and bathe him.

Even though Maysen is the oldest of her cousins and had lots of experience babysitting, she’d never experienced caring for someone as small as Mac.

“When he was born and weighed only 4 pounds, it was scary, and it was like everything I knew couldn’t help me because it’s different having a baby that small,” she said.

O’Malley, who’s spent over six years as a Methodist NICU nurse, said that her top priority is to be there for parents, especially first-time parents.

“I really enjoy first-time parents because of the newness for them and also because I’m pretty confident in my position,” she said. “And teaching parents is something I enjoy doing. It’s about giving them confidence so they can continue to do it outside of the NICU.

Maysen knows that every staff member her family interacted with at Women’s delivered The Meaning of Care, but Thamer and O’Malley stood out as being instrumental in making the Lakes’ NICU experience a positive one.

Maysen recalls Thamer being able to help subside her emotions.

“I would have a major meltdown, but she would reassure me that I was being a good mom,” she said.

Thamer understands that spending time in the NICU is rarely planned.

“It’s about providing experience,” she said. “You might not have a friend or family member who has had a baby in the NICU, so the nurses are really the only ones with previous experience.”

“Although we were only there for a few weeks, the nurses almost felt like family because they cared about our baby as much as we did, and they wanted to make sure my recovery was smooth sailing,” Maysen said.

Baby Mac is now 7 months old and weighs close to 20 pounds. Maysen admits that he’s never had a problem gaining weight, and he’s right on track with babies his same age.

She believes the success that Mac, Mom and Dad are having at home is because of their experience in the NICU.

“They made it just so easy,” Maysen said. “Even though the NICU is a scary thing, they didn’t make it seem scary. They made it seem comfortable and just let me be a postpartum mom and recover while they helped take care of our little guy.” 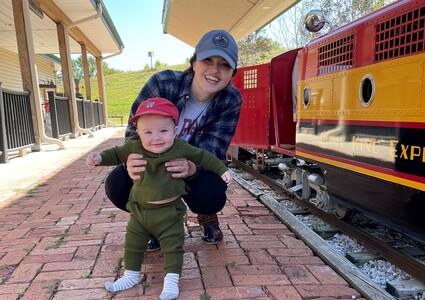