Christmas Is for Caring: Methodist Employees Give Back

Andrew Binderup felt a little bit like Santa Claus. The lab technician was decked out in Christmas colors of red and green as he and his co-worker and fellow elf Jordan Thompson loaded his “sleigh” full of toys collected by Methodist Pathology employees.

“Our staff was really into it,” he said with a gleaming smile. “We had some people coming back multiple times with toys saying they found something fun and had to buy it.” 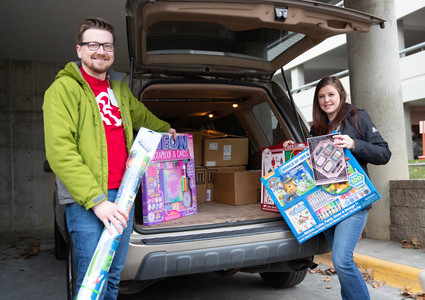 Binderup said pathology employees let the season of giving guide them in their quest to buy toys for children at Omaha’s Open Door Mission.

“We just decided that buying gifts for each other and doing a Secret Santa swap wasn’t going to cut it this year,” Binderup said. “We decided to go big instead.”

“We’ve got Barbies, sports balls, board games, makeup and even that cool Matchbox cars mat,” Binderup boasted before he delivered all the toys to the Mission’s donation center. “It was really cool to see everyone come together for these kids. It’s what Christmas is all about.”

Generosity was in the air across Methodist Health System this holiday season. At Methodist Physicians Clinic Westroads, the spirit of giving – and a little competition – pushed staff members to go all-in for another holiday giving event: the 2018 94.1 Diaper Drive. 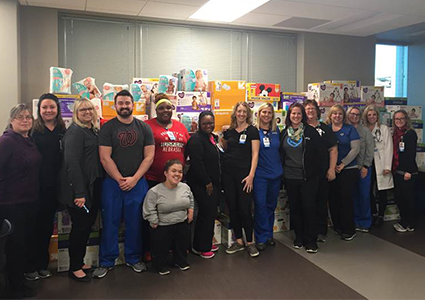 “We split our clinic staff into two different teams to see who could bring in the most diapers,” said Campus Manager Stephanie Hogan, MSN, RN. “The result was absolutely overwhelming.”

The annual Diaper Drive, proudly sponsored by Methodist, collects diapers donated to mothers in need at the Open Door Mission’s Lydia House and Homeless Prevention Programs. The annual event makes a big impact in the lives of at-risk families.

“Our staff collected 19,248 diapers,” Hogan said proudly. “It was our first competition, but it won’t be our last! It was incredible to see The Meaning of Care being put into action in a new way.”