Patient Escorts: The Feet and Heartbeat of Methodist

A sip of coffee and a big breakfast are Paul Clark’s fuel of choice as he begins each day of work at Methodist Hospital. Energy is important for his type of work.

“Hey there, sunshine! How are you?” Paul, a patient escort, asked as he passed a nurse on the third floor of the North Tower.

Just seconds later, his quick feet crossed paths with another hospital employee as he shouted, “Buddy! What’s going on?”

Before he could say anything to a third employee, she beat him to the punch. “Oh boy, here comes trouble!”

This made Paul laugh with his whole body, and his cheeks turned bright red. 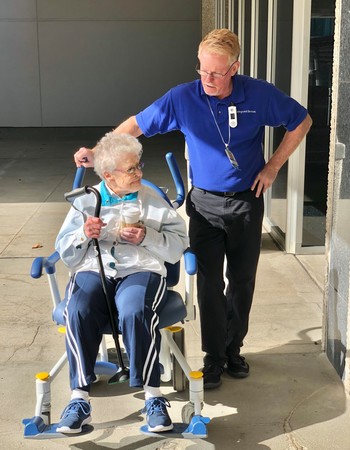 It was right about that time he met Blanche Underwood, one of several patients he’d assist that day. She was being discharged, and she needed to be wheeled to the lobby where her son was expected to pick her up.

“Are you ready to go home?” Paul asked.

On their way to the lobby, Paul and Blanche discussed the weather, their favorite cookies and Halloween candy.

“I try to stay away from it all,” said Blanche.

“Well, because it only adds to your calories, of course!”

Paul gave that same, whole-hearted laugh, and again his face got red.

“You’re a smart, smart woman,” he said with joyful tears in his eyes.

When Blanche’s son arrived, Paul sent her off with a smile and a wave.

“That’s the best part of my job,” he said. “Seeing people get well. Seeing them go home.”

He then went to locate the next patient on his list. 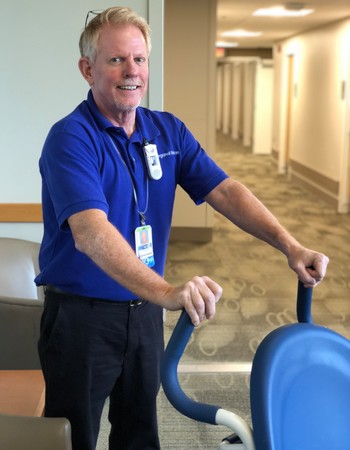 Paul’s job is to transport patients wherever they need to go at Methodist Hospital.

Whether a patient is due for an echocardiogram, a CT scan, an MRI, a colonoscopy, nuclear medicine or a Doppler ultrasound, Paul is responsible for getting that person there comfortably.

“You really have to judge your audience,” he said. “I love when I get people who like to joke. That’s right up my alley. But if someone’s really sick, sometimes you just need to show them compassion. Offer them a warm blanket.”

And it’s not just the sick patients who need comforting.

“I find that most patients are scared to go to an MRI,” he explained. “I tell them, ‘Just close your eyes and try to focus on the music that’s playing.’”

Paul admits the job of a patient transporter is far from glamorous. But it’s important.

“We’re kind of the unsung heroes, and I’m OK with that,” he said. “We do what we do so that nurses and aides don’t have to – so that they can really spend their time, resources and energy on the patients.”

Paul has a deep appreciation for “unsung heroes.” It stems from all the time he spent in a hospital alongside his wife as she battled leukemia. While there, he built several relationships with various hospital employees and thought: “I wonder if I could do this – work in a hospital and just help patients and their families feel comfortable. You know, make them smile.”

After spending about 30 years in telecommunications, Paul left his job to come to Methodist. He’s convinced he’s found his calling.

The physical and emotional toll

“Plus, it’s how I keep my fabulous figure,” he said as he gave another big laugh.

Paul easily logs anywhere from 12 to 16 thousand steps a day. This work can be exhausting. And not just physically.

“Especially working on the oncology floor,” he explained. “You’ll be taking a person to radiation for two weeks, and then all of the sudden you don’t see them here anymore. It breaks your heart.” 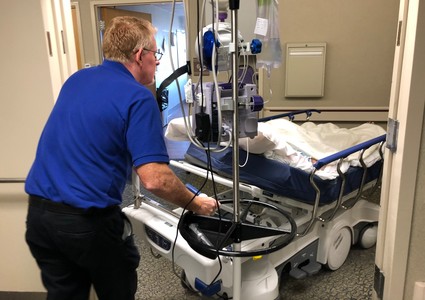 No place he’d rather be

As Paul picked up another patient for discharge, she recognized him right away and said, “Hey, you took me to surgery!”

The two began sharing stories of their first vehicles as if they had known each other for years. It was obvious Paul had made an impression on her.

“That’s the biggest compliment I can get,” he said. “When a patient tells you, ‘I hope I see you again.’”

Paul mentioned several times that he loves his job – that there’s nowhere else he’d rather be. And patients are only part of it. His fellow patient escorts are another.

“We’re a team here,” he said. “Patients comment on that all the time. We’re all in this together.”

And while the care they give patients is much different than that of providers, there are many similarities. Patient escorts are compassionate. They are dedicated. They keep things moving. And much like every Methodist employee, they go above and beyond to illustrate The Meaning of Care.