What It Means to Be a Medical Assistant With Methodist

Her eyes lit up as she answered the question: What made you want to become a medical assistant?

“I used to love going to the doctor,” said Tess Petersen, CMA. “I had the best nurse. But it wasn’t the nurse I wanted to be – it was the check-in lady!”

Petersen laughed as she told that story and revealed that nursing never interested her.

“For one, it requires longer schooling,” she explained. “I wanted to get in, get done and get out. And that’s what I did!”

Petersen is a graduate of the Medical Assistant Program at Nebraska Methodist College, where there’s a heavy emphasis on patient care.

Student outcomes for Methodist’s Medical Assistant Program are impressive. Petersen is part of the 94 percent of graduates who landed jobs within six months of finishing school.

Petersen was required to sit for the American Association of Medical Assistants certification exam prior to graduation. It was this exam that gave her a CMA credential – something most employers prefer or even insist on before hiring a medical assistant.

“The program is divided into four 10-week terms,” explained Marcia Franklin RN, MSN, RMA Medical Assistant Program director and assistant professor. “Each term builds on the last, and the final 10 weeks are spent in an externship at an assigned clinic working with a preceptor.”

Petersen’s externship was at the internal medicine clinic at Methodist Physicians Clinic HealthWest. That’s where she now works – under Kris Story, APRN.

The duties of a medical assistant

Petersen believes her 300-plus clinic hours at NMC prepared her to begin work right away. From the start, she was tasked with a number of administrative and clinical duties.

Her administrative duties at include:

Her clinical duties include:

“I think when I tell most people I’m a medical assistant, they think, ‘Oh, you take patients back, take their blood pressure, and that’s about it,’” Petersen said. “There’s a lot more to it than I think people realize.”

“Many people aren’t aware of the profession,” Franklin said. “Most people assume the medical assistant is a nurse in the clinic until they take the time to notice.” 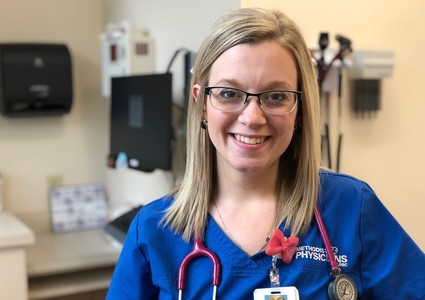 A big part of patient experience

Petersen is fully aware of how important her role is. She’s one of the first people a patient sees during a visit. She’s also one of the last. And she firmly believes she’s a big part of patient experience.

“I’m representing the doctor,” she said. “If I start someone’s appointment with a cold and hurried demeanor, for example, that patient probably isn’t going to be very comfortable or happy by the time the doctor walks in. And how are doctors supposed to provide the best possible care if their patients aren’t totally open to receiving it?”

“I love geriatrics,” she added.

She treats every patient as if they were her grandmother.

“I always think that way,” she said. “If my grandma was in a clinic like this, I hope she would have a medical assistant like me – someone she can talk to. Someone who makes her feel comfortable.”

In demand and valued

Petersen admits she’s had offers to work elsewhere. According to Franklin, that’s not uncommon.

But for Petersen, leaving the patients she sees regularly would be too difficult. Even more difficult would be leaving the Methodist family.