Commitment to Community: Nurse Practitioner Goes Above and Beyond During Flooding

Phone calls began pouring in as floodwaters surrounded Fremont on Friday, March 15. That was the day the city became a virtual island – and the day many within the community began to see Methodist Fremont Health as more than just a hospital.

As the natural disaster unfolded across the region, staff members quickly realized that this crisis was much bigger than what they saw within their own walls. They needed to stretch beyond them.

Floodwaters never did reach the hospital. Patient evacuation was never necessary. But several stories emerged, all with common threads: compassion, dedication and a commitment to The Meaning of Care during a time of unthinkable tragedy.

Among the heroes was a nurse practitioner whose devotion to her community won’t soon be forgotten.

“The Right Thing to Do”

As Rachael Nielsen, APRN, drove to her home outside of Dodge on Wednesday, March 13, she knew there was little chance of returning to work in Fremont on Friday.

Road closures and detours caused by flooding turned her normally 35-minute trip into a three-hour journey. Nielsen, a nurse practitioner with Methodist Fremont Health, also staffs the system’s clinic in Dodge on Thursday mornings – the village’s only direct access to health care.

By Thursday night, it was clear getting to Fremont the next day would be impossible. She made up her mind: She’d open the Dodge clinic instead.

Nielsen arrived at 8:30 a.m. and by 9 saw her first patient, who volunteered to post signs around town saying the clinic was open. More patients followed, mostly for minor issues and medical advice. By simply being at the clinic, Nielsen provided a critical backstop for the community – should an emergency arise.

Early in the afternoon, Nielsen got a call. A nearby volunteer rescue squad had picked up a patient with chest pains and needed her help. They weren’t sure how serious the patient’s condition was, but they knew this was no normal transport.

“If the roads were open, we would have gone to Fremont,” said Tom Kreikemeier, rescue captain for Snyder Volunteer Fire & Rescue. But the flooding made that 9-mile trip impossible. With ground transport stalled across the region, helicopter teams also were getting backed up with requests. 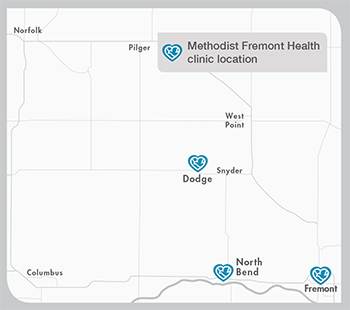 The plan was to pick up Nielsen for support, then navigate “back routes” about 17 miles to the small hospital in West Point, Kreikemeier said.

When the squad arrived in Dodge, Nielsen climbed aboard and began monitoring the patient’s heart. She immediately saw signs of damage.

“Once we got him hooked up, I could see that it didn’t look good,” she said.

Said Kreikemeier: “She looked at the monitor and said, ‘Holy crap. This guy needs a cath lab now. We need to go to Norfolk.’”

The squad made a call to Norfolk, where Faith Regional Health Services has a catheterization laboratory and is equipped to care for patients with heart conditions. Despite dangerous travel conditions, the roads to Norfolk were safe for emergency vehicles.

With every moment precious, they took off. Nielsen rode along to help “if something went south,” she said. They stopped 30 miles later in Pilger to transfer the patient to a waiting squad from Norfolk.

“It was great, great support,” Kreikemeier said of Nielsen’s efforts. “That’s what it’s kind of like in small towns.”

Nielsen returned from the ambulance run in the midafternoon, but she knew there was work to be done.

With her 14-year-old daughter, Madeline, she gathered basic medical supplies from the clinic and the pair headed to Snyder. There they set up a first aid station at a shelter for evacuees from nearby North Bend. They provided basic care, treating a few scrapes and giving out aspirin. Nielsen stayed until about 9 p.m. and offered to be on call through the weekend.

Her busy Friday was behind her, but Nielsen wasn’t through. She usually has Mondays off, but with the roads open, she didn’t hesitate to head to Fremont. She knew her coworkers at the clinic could use her help.

Nielsen’s actions are just one of countless examples of Methodist Fremont Health staff members going above and beyond during the flooding. President and CEO Brett Richmond saw much of it and couldn’t be more proud.

“In the 10 years I’ve been here, the impact that we have on the health of our community has never been more evident or visible,” he said.

That same commitment to community is what drove Nielsen to step up without hesitation. Caring for her neighbors is part of her identity.

“Not very many people get a chance to change the world,” she said, “but there’s a lot of us out there who can change our little corner of the world.”