His love of baseball and softball runs deep. But even deeper is the pride he has for his family.

Mark Schmidt, 50, talks about his children often. He’s quick to share photos and details of their talents, and his Twitter account is essentially a highlight reel of his three favorite all-stars. His son plays baseball, his oldest daughter played softball, and his youngest daughter still does. There’s no question. He’s their No. 1 fan.

“They’re the best part about me,” Mark said.

But being away from them was the worst part of cancer.

From Earache to Cancer

Mark’s journey began in November 2018 with a persistent earache. He had noticed a lump in his neck, but he assumed it was a swollen lymph node related to a possible ear infection. He made an appointment with his primary care physician and was eventually referred to an ear, nose and throat (ENT) doctor. The ENT ordered a CT scan of Mark’s head and neck and said he’d be in touch with the results.

“The ENT never called me,” Mark said. “I got a call from Methodist Head and Neck Surgical Oncology Clinic, and I thought, ‘This isn’t good.’”

So Mark and his wife, Stephanie, made the nearly three-hour trip from their home in Hastings to Omaha to confirm the diagnosis they feared. It was cancer. And it was HPV-related. Mark had a tumor in his neck and one at the base of his tongue.

“Right then and there I looked at my wife and said, ‘You make sure the kids are vaccinated.’”

“Yeah, your world stops spinning,” Mark said. “Dr. Lindau sat there with us for probably an hour while we bawled.”

Even though the couple had treatment options closer to home, they knew after that appointment that Methodist was where they needed to be.

Worth the "Wait and See"

Mark’s seven-week treatment plan began in March 2019. It consisted of chemotherapy once a week and radiation every day for five days at Methodist Estabrook Cancer Center (MECC). With two children in college and one in high school, Mark and Stephanie drove home to see their family every weekend.

“That was the hardest part,” Mark said. “Being away from them.”

Physically, though, radiation was “hell” for Mark.

“I couldn’t taste anything at all,” he said. “I couldn’t produce any saliva. Anything I ate tasted like a cotton ball. And then I got thrush. I lost 20 pounds in two weeks.”

Mark eventually needed a feeding tube. As he finished treatment at the end of April, he wondered: Was any of this worth it?

“It was just a wait and see,” he said. “Wait for three months to see whether the treatment worked.”

“I remember everything about that appointment,” Mark said. “I remember that whole day.”

It was the day he learned he was cancer-free.

Tears flooded his eyes when he was given the news, but Mark saved his hardest cry for the MECC parking lot.

And as some of those same tears began to resurface, Mark explained what hit him hardest that morning: “I knew in that moment that I was going to be able to see my kids play ball again.”

Mark wasted no time in tweeting his good news: 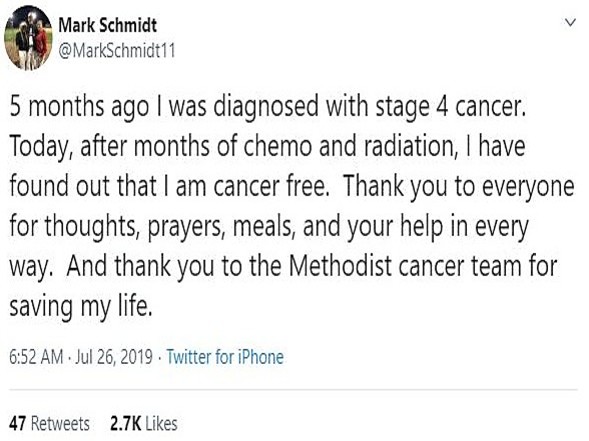 And he continues tweeting clean bills of health after every follow-up appointment. Every visit comes with a little bit of anxiety and a lingering fear of “what if it’s back?” But Mark always looks forward to seeing the people who had a hand in his care at Methodist: Dr. Lindau, Patrick Pick, PA-C, Yungpo Su, MD, with Nebraska Cancer Specialists and every one of his radiation nurses – they’re the real MVPs, Mark said, “but there was no one I didn’t get great care from.”

Mark admits that treatment was awful. There were days he wasn’t sure he’d make it through.

“But it’s better than being dead,” he said. “These guys saved my life. And if anyone close to me were to be diagnosed with head and neck cancer – no matter where they live – they’d be coming here. I’d make sure of it.” 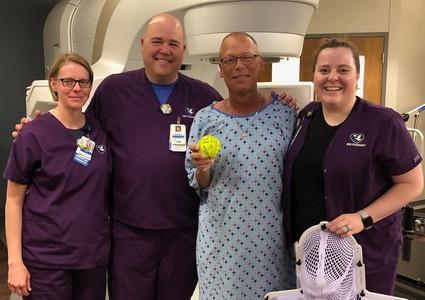