Aaron Pegg, 29, could never figure out why he was always so tired.

“No matter how much sleep I got, how much water I drank or how much better I ate, I always woke up groggy,” Aaron said. “I was always run down.”

Despite his lack of energy, Aaron knew it was important to stay active. During a forced trip to the gym in July 2019, Aaron recalls looking up at a TV when something caught his attention in the mirror in front of him.

“I saw a mass on my neck,” he said. “Right next to my Adam’s apple. Maybe a little bigger than a marble.” 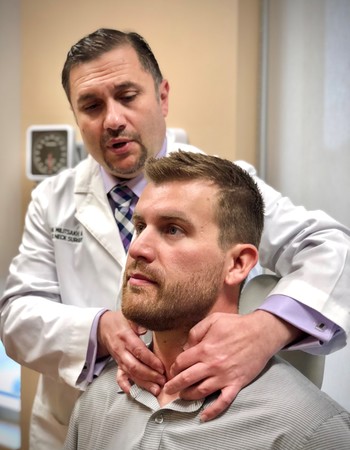 “The Most Surreal Experience”

Aaron wasted no time in scheduling an appointment with his ear, nose and throat doctor. An ultrasound and biopsy eventually revealed papillary thyroid carcinoma – or thyroid cancer – something Aaron had stumbled upon online, “but you never think it can actually happen to you.”

Even though most of it’s a blur, the day of his diagnosis is one he won’t forget.

“Just like in a movie,” he said. “All the noise died down. I basically shut down. The explanations of what I had and who I was being referred to became background noise. I heard it, but nothing was sinking in. It was the most surreal experience I ever had. And my biggest regret is not having someone there with me that day.”

But Aaron soon found himself in the presence of someone who stayed by his side through the rest of his cancer journey. He was referred to head and neck surgical oncologist Oleg Militsakh, MD, with Methodist Estabrook Cancer Center.

“I’ve never met a doctor who sat there and made it known that he was going to continue sitting there with me as long as it took for me to understand everything,” Aaron said. “He made it very apparent that no matter what was going on in his schedule, he had time for me.”

“It all comes back to the importance of addressing a patient’s anxiety,” Dr. Militsakh said. “When they know you have their back, they’re more open to participating in their care. That’s so important. Aaron and I became partners on the path to him getting better.” 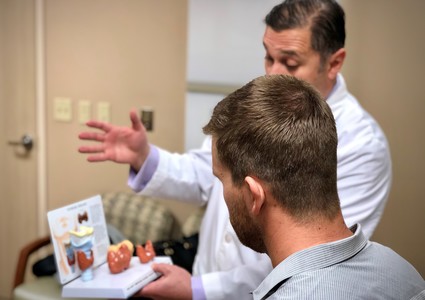 “I wanted it all out,” Aaron said.

And according to Dr. Militsakh, removing all of Aaron’s thyroid would mean a lesser chance of recurrence. So in September, Aaron underwent surgery – something he’d been anxious about.

“But from the anesthesiologists and all the nurses to every single staff member I met, everyone was so phenomenal and put me right at ease,” he said.

To ensure no other cancerous cells remained in his body, Aaron needed a round of radioactive iodine therapy about a month after surgery. The treatment filled his body with high levels of radioiodine, which required him to be in isolation for four days so as to not expose others to radiation. He stayed in his bedroom and “watched a lot of TV,” which was difficult for the construction foreman who’s used to always being on the go.

Still, he said, it was a small price to pay for the news that soon followed. 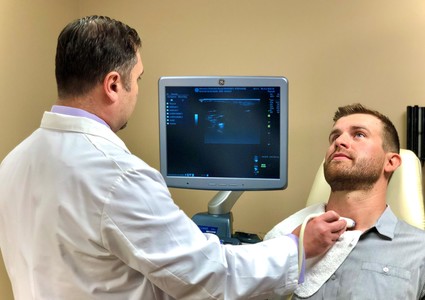 Newfound Energy and Outlook on Life

Aaron had his final scan in January, which is when Dr. Militsakh told him what he waited half a year to hear: There was no longer any evidence of disease.

“I remember his smile,” Dr. Militsakh said. “I won’t forget it. I could see the relief come over him. And that right there never gets old.”

“He saved my life, for sure,” Aaron said of Dr. Militsakh. “But he also changed my life.”

It’s hard for Aaron to explain the feeling that came over him at that appointment, but he tried his best to document the moment with a selfie on Instagram. Tagging Methodist Health System, Aaron shared one of his favorite quotes: “We have two lives, and the second begins when we realize we only have one.”

Part of his new life involves waking up at 4:30 a.m. to take medication each day. While it may sound like an inconvenience to some, Aaron welcomes his new routine – and his newfound energy.

“Most days are good days,” he said. “I don’t need a pot a coffee to feel alive anymore.” 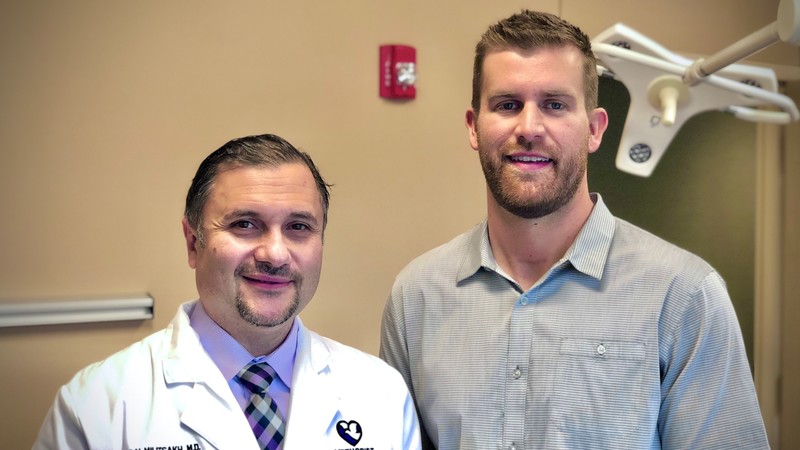 And when asked if he worries about future scans or recurrence, Aaron sounds self-assured with his response: “Not really. Since the beginning, I’ve been of the mindset that this was either going to make me or break me. And I was never going to let it break me.”

He’s focused more on living in a way he never has before.

“I was the person who always said, ‘Oh, it’d be nice to do or see that someday.’ But now, it’s like, ‘What am I waiting for?’ Treat every day like it’s your last, you know? Tomorrow’s never promised.”