A Birthday Surprise and a Mother's Wish for Her Daughter's Future

When Kai Aclinou, 37, was diagnosed with stage 3 ovarian cancer on Jan. 24, 2018 – her birthday – her daughter, Sena, wasn’t even 2. Sena became Kai’s constant companion through her appointments at Methodist Estabrook Cancer Center (MECC) – until COVID-19 hit. With the visitor restrictions put in place during the pandemic, Kai was missing her smiling companion – and the staff was, too.
As Sena’s fourth birthday approached in September, she had one wish: to go with her mother to MECC again and visit the staff who had become just as attached to Sena as she had to them.
The day Kai got permission to bring Sena, whose name means “gift of God,” to MECC, staff members joined together to surprise her with a few gifts of their own. It’s a birthday celebration that has become even more special to Kai as she makes the transition to hospice and reflects on the support and care she’s received from her physicians, nurses and the staff at MECC.
“I don’t know how to thank them,” she said.

Kai and her daughter have been beloved at MECC since Kai’s diagnosis. Among those who have known Kai and Sena since the beginning is nurse navigator Penny Fink, BSN, RN of Midwest GYN/ONC.

“There were times when Kai would be coming to the center three days a week, and Sena would come with her for the appointments,” Fink said. “And she was just a ray of sunshine. She’d come in and just smile.”

Last year, Fink gifted Sena a pair of dress-up shoes, which Sena took to wearing everywhere. The gift made such an impression that Sena now calls every nurse “Penny.”

“For her, everybody is Penny,” Kai said. “All she knows is Penny.”

Dawn Mielke, RN, has been Kai’s nurse in the Infusion Center through all her chemo treatments. Since they don’t often have children in the office, the staff loved to spoil Sena whenever she came to appointments with Kai. Mielke even made a badge for Sena so she could be a part of the team that was taking care of her mom.

“There’s so much of her mom in her,” she said. “She loves to dance. She loves to put on a show and model and take pictures. Just an active, happy, beautiful girl.”

Kai’s daughter had made her way into the hearts of so many at MECC. So when Midwest GYN/ONC program manager Tiffany Villotta, BSN, RN, got word that the only thing Sena wanted for her birthday was to visit with her mother, there was only one answer: “Absolutely.”

On Sept. 9, Kai brought Sena, dressed as a princess and wearing a tutu made by Fink, to MECC. Starting at the valet stand, they passed out gift cards and chocolate to all the staff they encountered as they made their way through the building. What awaited Sena was a surprise that not even Kai knew about – a birthday party with treats and gifts from their friends at Midwest GYN/ONC. And that wasn’t all. Fink led Sena – teaching her how to wave like a princess as they walked – to the Infusion Center where a second birthday party was waiting for the little girl.

“She was so happy, and I was happy, too,” Kai said. “I didn’t know they were planning a surprise for her.”

At the end of the day, Sena called it her “best birthday ever.” 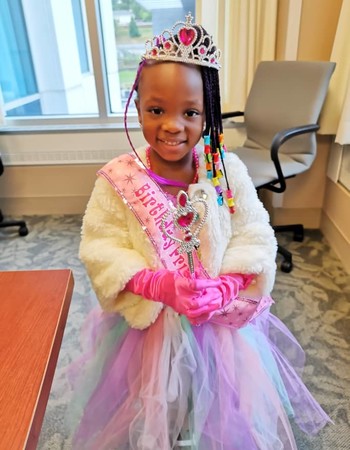 The day holds a special place in Kai’s heart as she transitions to the next phase of her disease. After undergoing two six-month rounds of chemo, she has chosen to stop treatment and transition to hospice care. Her focus is on her family, especially her daughter.

“She was my bigger concern before, but now I’m not scared anymore,” Kai said. “I could give up my life to just see her grow up, but I don’t have that power. So I would love people around me to let her know who her mom was.”

“She’ll do anything for anyone,” Sena said. She added: “The other day she said, ‘I have so many people who care about me.’ And I said, “Yes, because you cared about all those people, and if you go back, you’ll find out that you touched them somehow along the way and that’s why.’”

Kai is thankful for the support of so many, especially her husband of five years, Wilfrid, who quit his job to care for her the past year.

“I said to myself I don’t know if many people can do that,” Kai said. “Because he loved his job. He’s there for me every single day.”

“Kai always says she would be nowhere without him, and she wishes they had been able to enjoy the time they've been married a little more,” Sena said.

Kai has relied on her friend Sena, her older brother, Gaston, and the African Catholic community in Omaha. And she and her family are grateful to everyone at MECC who cared for her during her cancer journey.

“I don’t think I can find the words,” she said. “They are amazing. To be honest, if it’s not for them, maybe I would be gone a long time ago. From the parking lot to wherever I go – wow. Almost everybody knows my name."

“I get goosebumps,” Sena said. “Starting with Dr. Crotzer’s surgery and Dr. Nadkarni just coming in right when she did. Whenever I talk to her, I’m overwhelmed because I don’t even know how to thank her. Kai wouldn’t be here right now without Dr. Nadkarni. Penny, Dawn, Tiffany, the nurses – they were so personal. It’s just amazing. I don’t think she could have gotten any better care anywhere.”

Kai’s wish for her little girl with the big smile and princess dress is simple: “She has a great spirit, and I would love her to keep that spirit – to be who she is.”

She has Kai’s spirit. And those around her will fulfill Kai’s other wish to make sure her daughter knows who she is.

“I’d like her daughter to know that her mom loved her a lot,” Sena said. “That her mom has such a strong faith, and that that faith carried her from the beginning and got strong. And that faith gave her mom the assurance that her daughter would be OK.”