Just a day before her planned Panamanian cruise, Maggie* suddenly couldn’t catch her breath after bending down to tie her shoes.

“I can’t get … my breath,” she tried to tell her husband after sitting back up. “I can breathe … but I can’t get any air.”

After a few minutes of struggling, Maggie knew she would need someone else to take her grandchildren to school. She called their other grandmother for backup.

Maggie could barely talk on the phone, which helped her decide to head to the emergency department at Methodist Women’s Hospital, just minutes from her home.

Tests there revealed that she was negative for COVID-19, but emergency medicine physician Albert Dunn, MD, shared a separate alarming discovery: two large blood clots on either side of her heart. Because the clots were restricting access to pulmonary arteries in her lungs, she was diagnosed with pulmonary embolisms (PE).

After Maggie was transported by ambulance to Methodist Hospital and received initial treatment for her condition, vascular surgeon John Park, MD, and clinical research coordinator Dru McMartin, CCRC, MA, met with her.

Dr. Park drew a picture showing the size of her blood clots and their locations on either side of the heart, blocking access to both of her lungs. He also explained that Methodist was part of a clinical trial aimed at finding the best treatment approach for PE and asked if she wanted to be part of it.

The retired education administrator’s response: “I said, ‘Absolutely! In my career, I did research myself and know how important it is to find the basis for the type of interventions used in the future.’”

Despite having to cancel their trip, Maggie and her husband were thankful she received the diagnosis before leaving Omaha.

“We were so grateful that my condition happened prior to the cruise because we were all packed,” she said. “We were that close – just a day or so – from getting on an airplane, getting on a cruise. I wouldn’t have survived. There’s no way. And to have the kind of help available right here near our home meant the world to us.”

For years, PE has been treated solely with an anticoagulant, commonly referred to as blood-thinner medicine. But with advancements in technology, additional methods of treatment are now available. The problem? There isn’t enough research to affirm the best method of treatment.

Dr. Park, along with vascular surgeon Anjan Talukdar, MD, and pulmonologist Adam Wells, MD – both with Methodist Physicians Clinic – have joined forces with the Methodist clinical research department  to help put Methodist Health System on the stage with a number of other world-renowned hospitals by participating in the HI-PEITHO clinical trial. The trial is a joint research study led by Boston Scientific in collaboration with the Pulmonary Embolism Response Team (PERT) Consortium and the University Medical Center of the Johannes Gutenberg University of Mainz.

Methodist is one of up to 65 sites in the U.S. and Europe participating in the study. The trial consists of a head-to-head comparison of treating a PE with anticoagulation alone versus the combination of anticoagulation and the EkoSonic™ Endovascular System – which involves the use of a catheter inside the pulmonary arteries as well as ultrasound therapy to directly insert a clot-dissolving drug.

“The reason why the trial is so big is because it’s a direct comparison,” Dr. Park said. “This will allow for very strong statements to be made from the direct comparison of people who had anticoagulation and those who had advanced therapy.”

Maggie was intrigued by the trial because of the possibility of medical progress and the fact that it’s an international study.

“I honestly felt honored that I’d be able to do that,” she said.

Research based on small sample sizes is available and provides some insight on the effectiveness of the modern therapy. But according to Dr. Wells, this trial is set up to provide unique conclusions.

Dr. Talukdar noted that clinical trials, including HI-PEITHO, allow physicians to inform patients of scientific rationale for specific treatments rather than offering just their individual perceptions.

“That perspective or experience counts, but if you can back it up with scientific data, which is what we’re collecting, that’s exciting to me,” he said.

Methodist enrolled its first patient in the trial in October 2021, had three of the first five patients in the world and currently ranks No. 1 worldwide in recruiting, having nine of 51 total patients enrolled globally.

“It’s pretty exciting that we have a research team that is helping us find and identify the correct patients to be in these trials, that patients are willing to be enrolled into these trials, and that we’re able to be up and running so quickly and efficiently,” Dr. Wells said. “I think that speaks to the entire team that we have running the program behind the scenes.”

Dr. Park believes that Methodist’s participation in the HI-PEITHO trial is just another example of its commitment to providing patients with the best care possible.

“The Meaning of Care includes bringing research trials like this to Omaha so that patients in our area and other selected areas do get treated,” Dr. Park said.

“Even if we aren’t the biggest hospital, we can still be on the global scene if we do something special,” Dr. Talukdar said. “All of this comes from the fact that we care about our patients.”

Individuals suffering from a PE can experience a variety of symptoms, but the most common symptom is shortness of breath – as in Maggie’s case.

According to Dr. Park, there are different categories of PE patients. Some experience minimal symptoms and are able to combat those with anticoagulation. Others arrive at the hospital with a large PE and may have only hours or even minutes to live, which prompts doctors to do anything they can to help eliminate the clot. Finally, there’s a group of PE patients that seems to manage symptoms with medicine but suddenly become very ill. Dr. Park said that group is falling through the cracks.

“We thought initially they would do just fine, but most are actually not doing well and dying at home, and doctors don’t know that they aren’t doing well,” Dr. Park noted.

The HI-PEITHO trial offers hope of better outcomes for that final group of patients.

“We don’t have great guidance in navigating these high-risk, massive pulmonary embolisms, and I’m really excited that we’re on the forefront of helping figure that out,” Dr. Wells said. “I think that’s a statement to Methodist.”

Maggie continues to make progress and was given clearance to resume traveling, something that she and her husband love to do. She hopes that someday soon they’ll actually make it to the Caribbean for a cruise.

“I just want you to know how appreciative I am of the entire Methodist system,” Maggie said.

*To help prevent research bias and uphold privacy laws, Maggie’s real name and age must be kept private from Boston Scientific, the sponsor of the HI-PEITHO clinical trial. 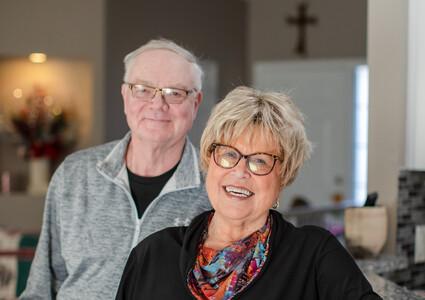