After a challenging journey toward pregnancy, Melissa and Mitchell Johnson were surprised times two in February when they learned – on 2/2/2022 – that they were expecting identical twins.

“Yeah, so that was crazy,” Melissa said.

Even more fortuitous would be the boy names that she and her husband eventually settled on after learning the babies’ sex: Leo, meaning “lion-hearted”, and Luca, meaning “giver of light.”

The beginning of Melissa’s pregnancy was fairly “smooth sailing,” she said. But at about 19 weeks gestation, the twins were diagnosed with type 3 selective intrauterine growth restriction – a complication that can occur with twins that share one placenta. 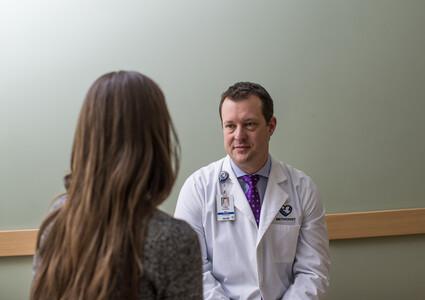 “One of the things I always joke about with patients is, ‘We all know how well kids share,’” said Todd Lovgren, MD, Melissa’s maternal-fetal medicine specialist. “So, in Melissa’s case, her kids didn’t split up the placenta evenly. One kid got just a small portion of the placenta, and the other baby got a much larger portion. When that happens, we have what we call selective growth restriction, meaning one twin is smaller.”

And in one of the twins’ many shared vessels, blood flow was essentially starting and stopping for Baby A – or Leo – which increased his risk of spontaneous death.

“If you lose one baby, you tend to lose both since they share circulation,” said Dr. Lovgren, who recommended Melissa be hospitalized at 24 weeks gestation and until she eventually delivered.

Close Monitoring and Medicine for the Soul 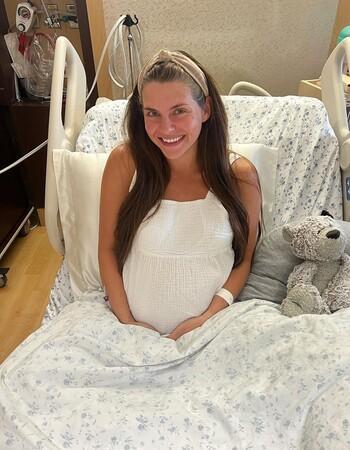 Following her doctor’s orders, Melissa made Methodist Women’s Hospital her new home in June. She received two ultrasounds each week and close monitoring three hours each day to ensure no concerning changes or drops in the babies’ heartbeats.

“I think I just kind of blocked out the idea of it all, for lack of a better term,” she said. “The thought of being in the hospital for who knows how long – I just knew I had to get through it somehow.”

As the region’s leader in women’s health, Methodist is known for its personalized approach to care. For Dr. Lovgren and his colleagues, treating patients is about so much more than just addressing their medical conditions.

“You’ve got to balance a mom’s anxiety with her physical needs,” Dr. Lovgren said. “Which is why I reminded Melissa that in between her monitoring, she’s a pretty normal patient. She’s not there because her cervix is dilated. She’s not there for some other complication. She’s only there so we can monitor the babies more closely. So I encouraged her to get outside, get some sunlight, stretch her legs – mainly so she could manage the mental aspect of her hospitalization as much as the physical aspect of it.”

Melissa learned to look forward to “the little things” – like an hour of prayer each day; new visitors here and there; her husband staying with her on the weekends; ample reading, television and puzzles; trips to the cafeteria to sample the soup of the day; lots of walks outside; and time spent laughing with her core nurses.

“One of my nurses, Chandra (Combs), actually went to the store and bought me boxes of Ho Hos and Ding Dongs after learning that I had never tried them,” Melissa said with a boisterous laugh. “And she was right – 100%. They were so delicious.”

Being treated with The Meaning of Care was medicine for the soul, Melissa said. Though her days in the hospital often felt long and scary, her care team always had a way of putting her at ease.

At nearly 30 weeks gestation, Dr. Lovgren noticed something peculiar. Melissa’s ultrasounds were no longer showing the starting and stopping of blood flow to Leo.

“You could see the lit-up artery on the ultrasound,” Melissa said. “It appeared as if Luca had stopped using it and just gave it all to his brother.” 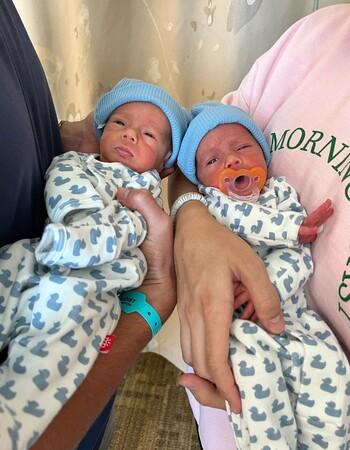 “I had never seen anything like that before, so I didn’t even know to have it on my radar as a possibility,” Dr. Lovgren said. “To be honest, when I called one of my buddies who works at the Colorado Fetal Care Center, his first reaction was to laugh. Because out of the hundreds of twins they care for each month, he had seen this happen only half a dozen times.”

“I’ll never forget Dr. Lovgren looking at me and saying, ‘Your prayer chain must be really strong because this is unbelievable,’” Melissa said.

And after 69 days in the hospital, “unbelievable” is how Melissa, who delivered at 34 weeks, described the moment on Sept. 2 when she heard the cries of her boys – little lion-hearted Leo (3 pounds, 6 ounces) and Luca (4 pounds, 6 ounces), who gave his brother light and life.

“Oh, my gosh, it was the best sound in the world,” Melissa said, becoming emotional. “Like, they’re here. They’re safe.”

In the Best Hands Possible

Despite Melissa’s eternal appreciation for Dr. Lovgren’s compassionate care and expert guidance, the humble physician refuses to take credit for her outcome.

“If you back up and take me out of the picture, and she was never admitted to the hospital, she probably would have had the same outcome,” he said. “I may not have made much of a difference in this pregnancy other than making her very worried.”

But even he can’t deny that she was in the best hands possible through it all. 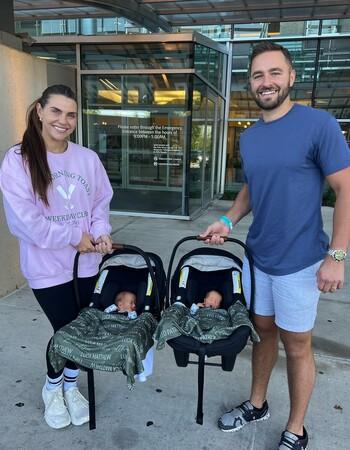 “We’re unique in how many multiples we take care of,” Dr. Lovgren said of his team at the Methodist Hospital Perinatal Center. “And knowing that there’s only so much of a situation we can control, we’ve learned that it’s usually best to take a more cautious approach. Because if, God forbid, something unfortunate does happen, we can rest easy knowing we did everything we could to give these babies the best chance possible. I’m confident that had a problem happened while Melissa was in the hospital, we likely would have saved those babies’ lives.”

“Miracles do happen,” Melissa said of her boys, who spent 22 days in the Methodist Women’s Hospital Neonatal Intensive Care Unit (NICU). “I think that’s the moral of the story here. But the fact that Dr. Lovgren held himself accountable through all of this and continued to go above and beyond in making sure he was giving us the best care and information possible, that tells me there’s no way we could have gotten through this without him and the rest of our care team.”