When it comes to cancer, the ability to pinpoint, isolate, destroy or remove dangerous cells is critical. It’s why our highly skilled teams of surgeons, radiologists, pathologists, oncologists and staff at Methodist Estabrook Cancer Center work tirelessly to find and implement the latest cancer-fighting technologies. And when new ideas are born, potentially life-saving clinical trials help our teams forge new paths for cancer treatment.

In the fight against endometrial cancer, Methodist is leading the way with a clinical trial aiming to prove that a method for finding potentially cancerous lymph nodes is effective. In this case, a green dye may light the way for surgical oncologists. 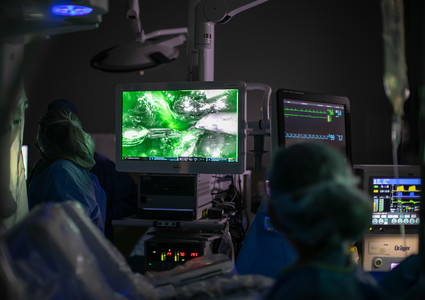 In the darkened Methodist Hospital operating room, all eyes were fixed on the video screens as an iridescent glow lit up the monitors. The pulsing green dye, seen through cameras that were aimed at the surgical field, looked like something out of a sci-fi film as two robotic arms snipped away at the edges.

“And that’s the right sentinel node,” David Crotzer, MD, announced from the controls of the DaVinci surgical robot. The gynecologic oncologist at Methodist Estabrook Cancer Center's Midwest GYN Oncology Clinic then removed the tissue for biopsy.

It was just the first part of a procedure that would help Vicki Brink beat cancer.

Vicki made an appointment with Methodist Physicians Clinic OB/GYN William Weidner, MD, after experiencing some unexplained bleeding. At 73 years old, the only times she had ever been in the hospital were to have her babies. To say hearing the word “cancer” took her by surprise is somewhat of an understatement.

“It’s been a little bit of a whirlwind,” Vicki said.

Dr. Weidner delivered her a diagnosis of stage 1 endometrial cancer and referred her to Dr. Crotzer.

“It’s a real shock, but I’ve been blessed with good care and the right people every step of the way.”

As a specialist dedicated to the diagnosis and treatment of gynecologic cancers, Dr. Crotzer is no stranger to treating endometrial cancer like Vicki’s. In fact, he and his team are leading a clinical trial with the hope of solidifying a new standard of care. Their goal is to ensure doctors remove the cancer while helping the patient maintain a high quality of life. It all has to do with lymph nodes.

Lymph nodes are an important component of our body’s immune system, attacking and destroying germs throughout our body in a watery fluid called lymph. The nodes work as tiny filters, getting rid of the bad and replacing it with good. But when it comes to cancer, this lymphatic network can also be a superhighway for disease to travel throughout the body.

While it’s important to remove potentially diseased nodes, cancer specialists like Dr. Crotzer are doing what they can to save healthy ones.

“The more lymph nodes you remove in relation to cancer, the more potential that women have for swelling and discomfort from lymphatic fluid collecting in their pelvis and legs,” Dr. Crotzer said. “We’re trying to make sure that patients who have nonaggressive cancers don’t undergo lymph node dissections if they don’t need them – minimizing unwanted side effects while also making sure that any affected lymph nodes are removed.” 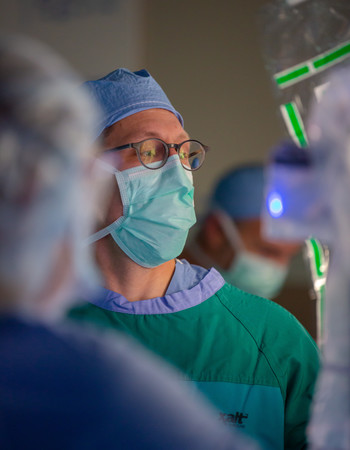 What is sentinel lymph node mapping

Sentinel lymph node mapping is a procedure in which an iridescent, green dye is injected near a tumor, with the intent of it being absorbed by nearby lymph nodes.

“The idea is you inject the dye close to where the tumor is, and it will find the very first lymph node in that organ system,” said Brent Tierney, MD, a gynecologic oncologist at Methodist Estabrook Cancer Center’s Midwest GYN Oncology Clinic. He is also one of the experts leading the clinical trial.

The first lymph nodes to be illuminated by the dye are known as sentinel lymph nodes – those that would be the first to carry and spread cancerous cells from a tumor.

“If you take that lymph node out, test it and find there's cancer in there, then there's probably a chance the cancer has already metastasized,” Dr. Tierney said. “If you take out that first sentinel lymph node and there is no evidence of cancer, there’s a greater chance all of the other lymph nodes are going to be negative, too.”

When it comes to endometrial cancer, the question hasn’t been whether sentinel lymph node mapping works – it’s researching how the lymphatic system works in that particular area of the body and whether mapping the nodes can actually pinpoint those that would be most affected by the disease.

“Sentinel node mapping was tricky for endometrial cancer because we were trying to figure out where you inject the dye,” Dr. Tierney said. “Should we inject it in the uterus on the tumor, or can we inject the cervix? What we have found is that we actually can just inject the cervix and have a pretty good idea if the sentinel node is negative, thus the other lymph nodes are more than likely going to be negative as well.”

Sentinel node mapping clinical trial benefits the patient and beyond

The clinical trial now underway hopes to prove that injecting the dye into the cervix is the best place to start. Similar trials have been done at institutions such as the Mayo Clinic and the University of Indiana, and researchers have gained valuable information. This clinical trial will ultimately look at patients who undergo sentinel lymph node mapping and full lymph node dissections.

Today, nearly all endometrial cancer patients at Methodist – no matter their stage – have the option to join the trial and have their lymph nodes mapped.

“Sometimes clinical trials don't necessarily have a direct benefit to patients,” Dr. Tierney said. “But this particular trial does have a direct benefit to all patients. They get that extra reassurance of knowing if there are lymph nodes involved with their cancers. Plus, I have a lot of patients tell me, ‘If this is going to help someone else to be a part of this study, I’ll do it.’”

Even with a nonaggressive stage 1 cancer, Vicki was eager to join the study.

“I thought this would be a really good procedure and give me some reassurance that the lymph nodes don’t have any evidence of cancer,” she said. “I also know that I’m doing something to help other ladies who may be facing something like this.” 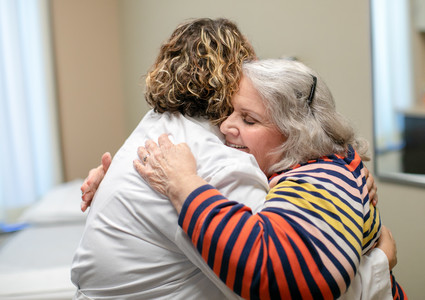 Methodist has long been a leader in offering clinical trials to patients, and providers appreciate the support Methodist has given them when it comes to advancing the science behind treating gynecologic cancers.

“Methodist has always been very committed to advancing care,” Dr. Tierney said. “Any time we have clinical trials open up, Methodist leadership always been right there to say, ‘Absolutely. What do you need?’”

“I find it really impressive that an institution like Methodist, which is not a large academic university, has such a robust and vibrant research program that really affords patients the opportunity to participate in clinical trials,” he said.

“The more data we have that supports this procedure as a reliable, safe and effective way to evaluate endometrial cancer, the better it is for future patients,” Dr. Crotzer said. “We owe a great thanks to our current patients who are willing to participate because they are the ones that are moving this science forward.”

“I consider myself very lucky,” Vicki said. “I’ve been blessed with the care I’ve received at Methodist.”

Learn more about the clinical trials at Methodist.