'I Was Supposed To Be Here'

One year ago, Jenna Liberto had what she considers a life-changing experience: a high-risk pregnancy and major health scare.

But thanks to the care and compassion of a Methodist nurse, her story has a wonderful outcome.

High-risk and far from home

At 33 weeks, Jenna was on her second hospitalization while pregnant. She was transferred from a hospital near her home in Sioux City, Iowa, to Methodist Women’s Hospital. Diagnosed with placenta previa and accreta, she was scheduled for a cesarean section at 35 weeks.

“I was very much supposed to be here for this experience,” said Jenna. “While I was down here I just felt like I had to stay so positive – just focus on the prize at the end of this. I tried not to think about the scary stuff too much.”

Also facing a hysterectomy and knowing the risks of both the surgery and her conditions, Jenna became terrified as her due date approached. She knew her baby would be OK, but she feared she wouldn't be around to raise her.

That’s when her nurse, Connie, stepped in. 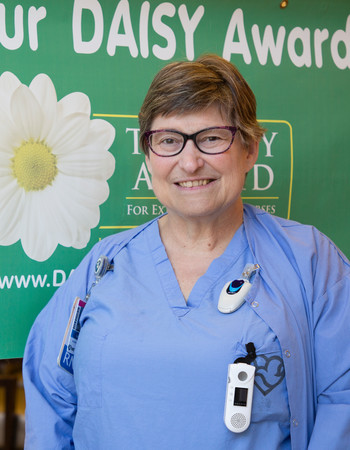 Lots of experience, lots of heart

Connie Klaumann, RNC-OB, has been a nurse with Methodist for 30 years. With a smile and a personality that would light up a room, she’s the kind of nurse every expecting mom wants by her side.

“A little bit of experience helps you kind of know what to expect,” said Connie. “I want to know what my patients’ questions are and try to figure out what it is they might want to know or what they might be worried about. I just spend time talking to them, and that’s my favorite part.”

After a few days with Jenna, Connie could see the nerves starting to take over.

“She could see how nervous I was in a different way than I think anybody else had recognized,” said Jenna. “I was trying to stay so strong for my family and my husband and my other kids. And she looked at me right before they wheeled me into surgery and she said, ‘You're going to be OK.’”

Those five simple words, said with care, confidence and heart, made a monumental impact on Jenna’s emotions in that moment.

“It seems so simple, but her words carried me through the surgery prep and being wheeled into the OR,” Jenna wrote in an emotional letter to Methodist. “They were said with the compassion of not just a nurse, but a mother, and while I was trying to be strong for my OWN mother, who was extremely concerned, that's just what I needed. I truly never believed those words until I heard them from Connie.”

Jenna says her surgery went perfectly and her beautiful daughter was born healthy. And while her memories from recovery are hazy from anesthesia, she vividly remembers Connie coming to check on her. She felt comforted knowing Connie had been thinking of her and saw her on the other side of her life-changing experience.

“While I don’t remember what she said, I do remember just feeling her saying, ‘See? I told you so,’” Jenna recalled. “To have somebody here who really knew what was happening and who was also able to love me like family that day … that carried me through the surgery and through the scariest part of what we experienced.” 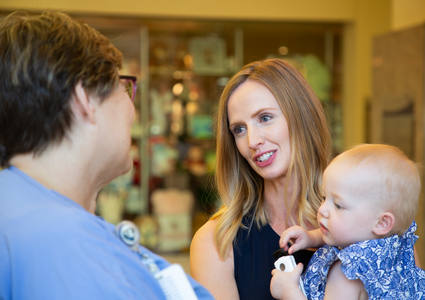 Her happy, healthy daughter just celebrated her first birthday, and still, Jenna has been reflecting on her time at Methodist Women’s Hospital. Even to this day, one of her most poignant memories of the day her daughter arrived is Connie’s reassuring calm.

“I received the best care I could've imagined at Methodist, but it's because I felt so loved by people like her that I have so many good memories from what was a scary time,” she said.

For the excellent care she gave Jenna and other patients, Connie was awarded the DAISY Award for Methodist Hospital and Methodist Women’s Hospital. It’s an honor that celebrates the extraordinary skill and compassionate care given every day by nurses like her.

“It is such a strong memory even a year later,” Jenna said. “That says something, and I wanted to reach out and make sure she knows it.”

To nominate a nurse at Methodist Hospital or Methodist Women’s Hospital for the DAISY Award, visit www.bestcare.org/daisy.