The human heart can beat up to 100,000 times a day, all the while pumping nearly 2,000 gallons of blood to vital organs and tissues in the body via 60,000 miles of blood vessels.

When the heart is functioning in perfect rhythm, the human body is performing at a very high level. But when this muscle, no bigger than your fist, begins to malfunction, it can have a significant impact on the entire body.

One of the most common conditions, impacting nearly 3 million Americans, according to the Centers for Disease Control (CDC), is atrial fibrillation (AFib) – a heart arrhythmia condition that causes the heart to beat irregularly and often times too quickly or too slowly.

When this occurs, the normal beating in the upper chamber of the heart is irregular and blood doesn’t flow as it should to the lower chamber. People can have brief episodes of AFib or it can be a chronic condition.

“We are seeing more and more cases of AFib because one of the risk factors is age, and our population is certainly aging,” said Matthew Latacha, MD, cardiologist/electrophysiologist with Methodist Physicians Clinic Heart Consultants. “Other risk factors can be chronic health conditions such as high blood pressure or diabetes, and the numbers of patients with those conditions are also on the rise.”

While medications to correct AFib can be effective, some patients are also placed on blood thinning medications to prevent blood clots from developing and reduce the risk of a stroke. AFib is one of the biggest causes of stroke in the U.S., and those with AFib tend to have much more significant strokes.

In addition to medications, AFib patients may require assistance from an ablation procedure to correct the irregular heart rhythm or a medical device such as a pacemaker.

The evolution in cardiac care has been significant through the years – but recently revolutionary cardiac devices have been developed for those suffering with heart rhythm problems.

“For so long in the electrophysiology world, many of the advancements we had developed was the ablation of tissues or electrical pathways,” Dr. Latacha said. “We’ve not seen much new medical device technology for some time, so our recently developed devices are revolutionary for us and for patients.”

So what's all the excitement about?

How about a wireless pacemaker the size of a AAA battery and a jellyfish-looking device that will stop blood clots that often lead to stroke? Both devices and procedures became available to AFib patients at Methodist Hospital in late 2017 and early 2018, respectively.

Always on Her Mind

Sandy Pykiet is the proud grandmother of six grandchildren. From cheerleaders to softball players, Pykiet enjoys supporting her children and their grandchildren. She likes staying busy, especially following the passing of her husband three years ago.

“Being a grandma is important,” she said. “It keeps me young.”

Pykiet, of Omaha, was diagnosed with AFib following a car accident in 2000. She has been on Coumadin, a popular blood thinning medication, since the diagnosis, and the possibility of a stroke was always on her mind, especially given that her mom died from a stroke.

“I have been lucky,” she said. “I have remained healthy and have not had any bleeding issues the past 18 years. Given my mom’s health history, though, I’ve always felt I was a prime candidate for a stroke.”

She was the first patient to undergo the WATCHMAN™ procedure at Methodist Hospital in April. Dr. Latacha and the Methodist cardiac team have successfully performed 10 procedures since. Boston Scientific Corp. received Food and Drug Administration (FDA) approval for the device in 2015. More than 50,000 patients have received the implant to date. 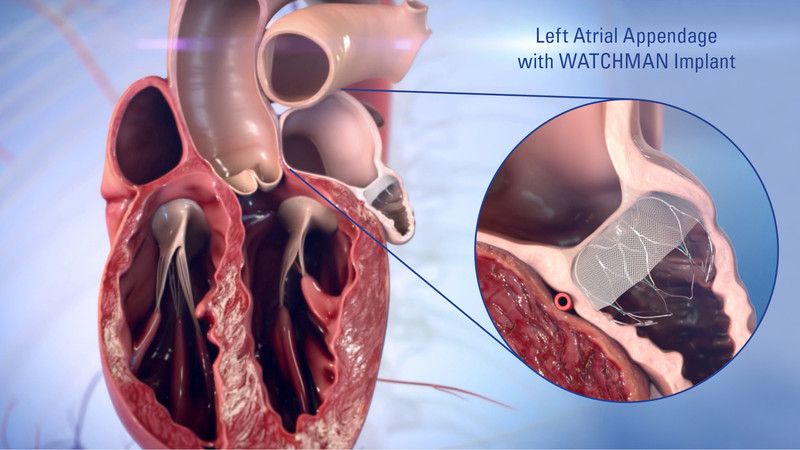 The biggest culprit for most strokes in AFib patients is the heart’s left atrial appendage (LAA), where 90% of blood clots develop. The WATCHMAN™ puts a stop to that. The LAA is a finger-like appendage, and each person’s is unique – much like a fingerprint.

“For many years, patients with a high stroke risk would have their LAA surgically removed, which was an open heart surgical procedure," Dr. Latacha said. "This new device is a game-changer for us."

Not everyone is a candidate for the WATCHMAN™, which is why Methodist’s team approach to the procedure is so vital.

“When performing the TEE, I’m looking for several things,” Dr. Jurrens said. “First and foremost, my job is to provide Dr. Latacha with measurements of left atrial appendage size. I take measurements of both the width and depth of the left atrial appendage at four standard angles. Some appendages have more favorable anatomy, but in general it is better to have smaller width and longer depth. I’m also scanning the appendage for any evidence of clots.”

Those measurements are crucial as the WATCHMAN™ comes in five sizes, and proper fit is essential to the device’s ability to stop clots from passing through.

During the TEE, the septum — the “wall” that separates the two upper chambers — is also evaluated. At all times prior to and during the procedure, the TEE keeps track of any fluid that is accumulating around the heart.

During the WATCHMAN™ procedure, the device is delivered via a transfemoral (groin) approach. A second TEE is conducted by Dr. Jurrens to provide Dr. Latacha with real-time images that help him guide the catheter from the femoral vein to the heart, where a small hole is made in the heart’s septum. Doing so gives Dr. Latacha access to the LAA and the ability to place the device.

“The TEE during the procedure is so important," Dr. Latacha said. "The correct position during the pass through of the septum is critical. It is in such close proximity to the aorta, so angle and location is crucial. Once we are through the septum, the TEE shows us the real-time images of the appendage and helps us guide the device to proper location."

Once properly placed, the device undergoes a “tug” test to assure it’s secure. Additional images are provided for further assessment.

A third important member of the WATCHMAN™ team is Edmund Fiksinski, MD, an interventional cardiologist with Methodist Physicians Clinic Heart Consultants. During each procedure, Dr. Fiksinski and Dr. Latacha have a tag team approach to ensure a successful outcome. It’s a second set of hands and eyes at the table. The trio work flawlessly together, which is attributed to the training they completed before the WATCHMAN™ debuted at Methodist.

“It was important to us that we did the training for this procedure as a team," Dr. Latacha said. "We were unique in that regard, as most health care systems don’t opt to do so. When we place the device and before we release it, all three of us have to agree that we are satisfied with the placement and function of the device.”

“We call that anti-coagulation liberation day,” Dr. Latacha said. "For those patients to be off their blood thinner medication is huge.”

Pykiet fell into the 95% category.

“This procedure gives you such peace of mind," Pykiet said. "There is real comfort in knowing that if something happens, that little device is in place and will catch it. I truly put my faith in Dr. Latacha. He and the other doctors are fabulous, and I trusted them.”

Pacemakers are often placed in patients with chronic AFib. For several years Dr. Latacha and other physicians have utilized the traditional pacemaker, which is placed just under the patient’s skin, near the collarbone. Leads, or small wires, are threaded to the upper or lower chamber of the heart, or in some patients, both chambers.

Parameters are established for the pacing device, increasing the heart rate if it is beating too slowly.

“The weak link, if you will, with the traditional pacemaker is the leads,” Dr. Latacha said. "Those leads enter the veins that lead to the heart, and that can be a hostile space. Leads are subject to, up to 80 times a minute, a lot of twisting and turning. So you run the risk of them becoming dislodged, and in our older patients those leads do come with an infection risk.”

Dr. Latacha has performed more wireless pacemaker procedures than anyone in Nebraska since Methodist began offering them in late 2017. The device is 93% smaller than traditional pacemakers, and its design, which results in less energy to pace the heart, means a battery life of up to 12 years. The world’s smallest pacemaker, the Medtronic Micra, was introduced in the United States in April of 2016.

All this is not to say the traditional pacemaker hasn’t been effective for patients, but the wireless pacemaker is a great option for those who need pacing only in one chamber. The post-surgery restrictions are less cumbersome, and replacement is as easy as placing another wireless device via catheter.

“The wireless pacemaker is contained within a large catheter device,” Dr. Latacha said. “The actual pacemaker looks like a small AAA battery with four ‘hooks.’ Upon threading the catheter/pacemaker to the ventricular chamber we deploy the device with the intent of securing at least two of the hooks into a specific area in the heart’s chamber.”

The wireless pacemaker procedure can be completed in 20 to 30 minutes. Recovery involves resting quietly for a few hours to allow the groin area to heal.

“Just getting to this point (leadless device) of the pacers sensing and adjusting based on your level of activity was a huge leap forward,” Dr. Latacha said. “The first hurdle was getting a device that not only works, but works well with a low risk of complications. We have that now. Who knows what the future holds, but if we can put this pacemaker in both chambers, you expand the device’s capabilities and the number of patients who can benefit."

With this advent of this new technology, Dr. Latacha says the future is very bright for patients who need the medical interventions necessary to live long and healthy lives.

“It is an honor and a privilege to specialize in the treatment of this most vital organ," he said. "The opportunity to mend a broken heart in an age when we have so many tools to both prolong and enhance the lives of our patients is truly remarkable. There is no job I would rather do.”

Photos and video by Daniel Johnson.

Claudia Bohn, a former journalist, is director of public relations/communications for Methodist Health System and loves sharing stories that highlight The Meaning of Care. 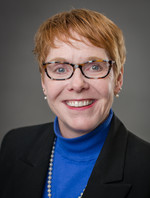