EksoNR Robotic Exoskeleton: A New Tool for Patients on the Path to Independence

Thanks to a generous donation, Methodist Hospital had just received Ekso Bionics' state-of-the-art rehabilitation tool for patients who are unable to walk or have difficulty walking. Therapists at the Acute Rehabilitation Center thought Alan would be an ideal candidate.

“I thought it was pretty cool,” said Alan, who was recovering from a major surgery that included fusing several vertebrae. “I’ll do whatever they want me to. I’m game for about anything.”

Before his back issues began about a decade ago, Alan loved to go hunting, golfing, snow skiing, water skiing and knee boarding. But after three surgeries for various spinal cord issues, the former industrial maintenance technician was left with weakness and spasms in his legs that made taking even a few steps impossible without a walker – and even then with significant strain on his upper body. Now, getting around often means using a wheelchair and public transportation.

As Alan sat in EksoNR for the first time, his excitement momentarily flickered.

“It was intimidating. Pretty scary,” he said. “I had no idea what to expect.”

Then, with guidance from therapists and support from EksoNR, he stood up and was soon walking.

In the months since, Alan’s ease with the technology has only grown. Since being discharged from the Acute Rehabilitation Center last fall, he’s been using EksoNR as part of his outpatient physical therapy. It’s the part of his rehabilitation that he enjoys the most.

“I like being in it because I’m up,” he said. “It’s not like trying to walk with my walker. That’s a lot of exertion and takes a lot out of me. It just makes me feel better when I’m using the Ekso.”

While Methodist’s acute rehab patients receive care for a range of conditions – stroke, spinal cord injuries and traumatic brain injuries are common – many have the same goal.

“Ultimately, that’s one of the first things that patients zero in on when they get here: ‘I want to walk,’” said Travis Eichenberger, PT, DPT, one of three Methodist inpatient physical therapists trained to use EksoNR. “Walking out of acute rehab when they go home is one of the most important things to them. There’s such a heavy emotional tie to that independence when you’re walking by yourself or walking with an assistive device without someone helping you.”

It can be a long road to independence, though. A patient’s needs during inpatient or outpatient therapy can include assistance with balance, proper gait, leg strength, endurance and even the confidence to stand and take steps. And with all the benefits associated with walking, every step matters. Patients like Alan especially need to maintain muscle strength and bone density in their legs to prevent fractures and other injuries. And weight-bearing exercises like walking can help regulate blood pressure.

Methodist has long employed a variety of techniques to help patients walk, including walkers, harnesses, parallel bars and aquatic therapy. But for some patients, the best approach has involved physical assistance by as many as four staff members – a process that can go slowly as they focus on patient safety and not overexerting themselves.

“It’s a little army,” said Sarah Cockle, PT, DPT, Methodist Hospital’s service leader for therapy services. “Maybe one is holding up their body, one is advancing their leg, one is following with a wheelchair. Sometimes walking isn’t even possible with three or four people.”

That’s where a tool like EksoNR can make such a big difference. 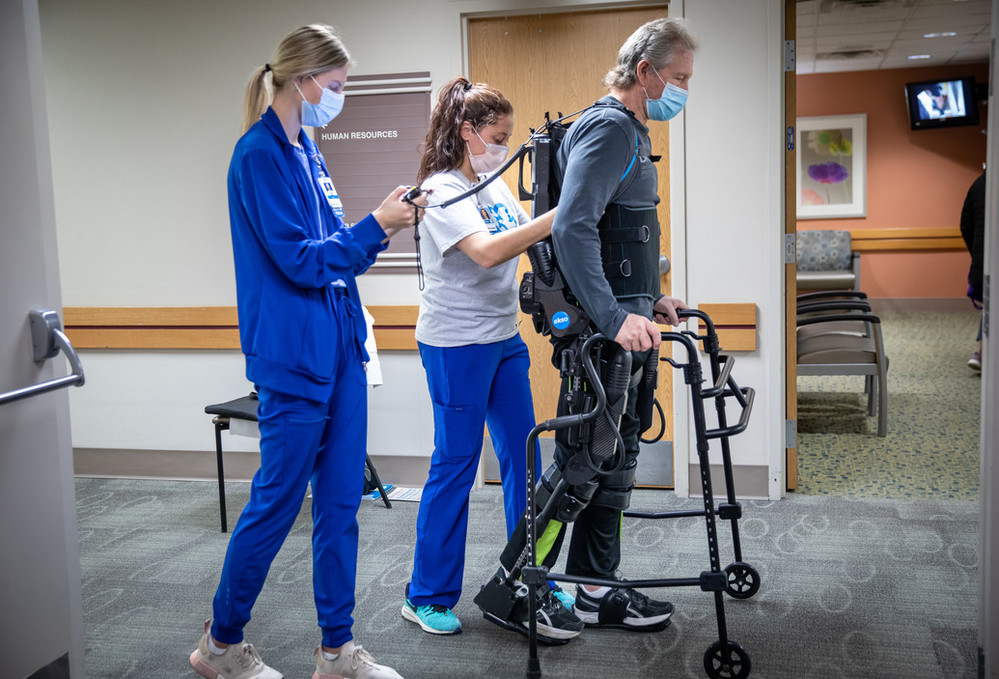 EksoNR is Ekso Bionics' most advanced exoskeleton and the only one approved by the Food and Drug Administration (FDA) to help patients after acquired brain injuries, strokes and spinal cord injuries, and it can also benefit patients with other diagnoses causing debility. The system provides unfailing physical support for the patient while tracking and delivering data about their progress to a physical therapist and rehabilitation technician.

Freed from much of the physical work of helping a patient stand and walk, they can focus on real-time data and guide a patient through the finer points of balance and gait. If a patient needs more of a challenge or more assistance, the system allows a therapist to easily adjust how supportive the exoskeleton is. If the patient needs to rest or suddenly sit, the team can gently support or guide them down with a reduced risk of falling.

The result can be more productive therapy sessions.

“Repetition is key to seeing improvement,” Cockle said. “That’s where the Ekso takes off some of the burden from the staff. Instead of maybe taking 10 steps, a patient may get to take 100 steps. So you’re reprogramming and rewiring the brain for a better recovery.”

“Our jobs can be very physically demanding, especially if you’re in an inpatient setting,” said outpatient physical therapist Myhra Roper, PT, DPT, who leads Alan’s therapy with EksoNR. “You’re lifting people out of bed. You’re helping them stand. You’re supporting their body weight while they’re trying to walk. Sometimes you’re helping a little bit, and sometimes it’s two of you on either side completely helping to lift the patient. With the Ekso, it helps that we’re not doing all of the grunt work. Hopefully, this helps prolong my career and the careers of fellow therapists.”

With all of its benefits, EksoNR has been on the Methodist rehabilitation staff’s wish list for years. And thanks to a gift from the Nebraska chapter of the Fraternal Order of Eagles as part of its Ekso Project, the dream is now a reality.

“This device will change lives,” said Tracy Madden-McMahon, president and CEO of Methodist Hospital Foundation. “Philanthropy is essential to bringing high-tech advancements to a nonprofit health care organization like Methodist. We are so grateful to the Fraternal Order of Eagles.” 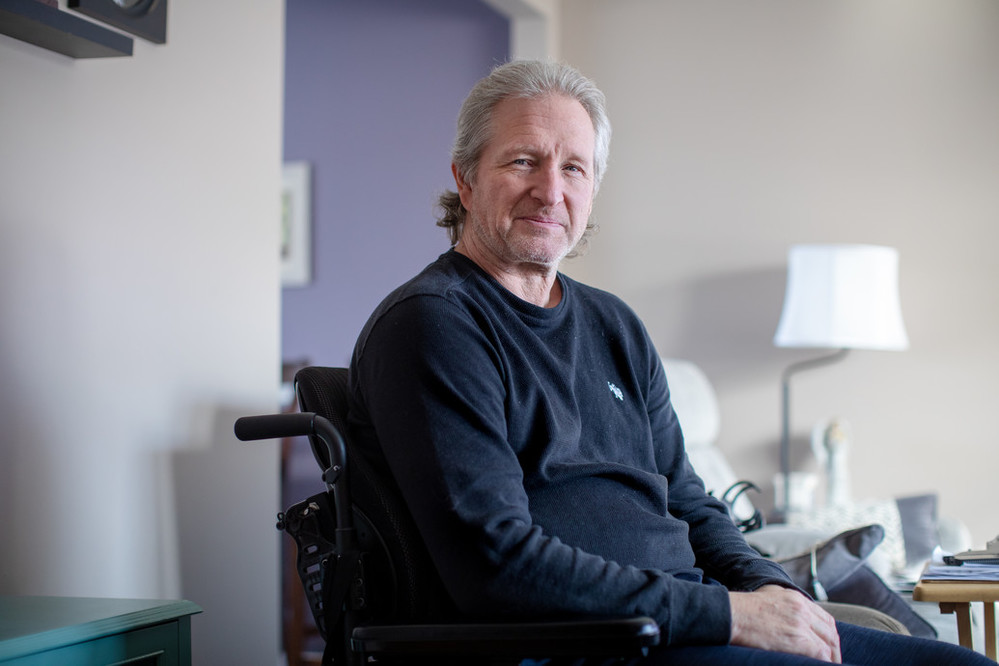 Beyond Alan’s time using EksoNR, his outpatient therapy includes sessions with a therapist stretching his legs, time on an exercise bike and walking as he supports himself on parallel bars. His doctors are hopeful that his ability to walk will improve as he gains strength and his body adjusts to a surgically implanted pump aimed at treating his muscle spasms.

“Our main goal for him is to try and make his mobility as functional as possible,” Roper said. “Will he ever be walking without some sort of help? I don’t know. We want to give him the ability to be able to walk far enough to get around his house. To walk out to his mailbox. To get out to his car so he can be more independent. That’s our main goal, to make him as independent as possible at home and to get out into the community.”

That goal may be uncertain for Alan, but he and his therapy team are seeing firsthand the difference that EksoNR can make for patients.

“It’s encouraging when I can see someone trust their body again,” Roper said. “As therapists, we learn when we feel like someone’s safe to progress and move on to the next hurdle. When they do and have that realization that they can do it, it’s great. They get excited, and it’s exciting for me as a therapist to know that we’re on the right path to improve their mobility and hopefully get back to some sense of normalcy.”