Mark Kitzelman describes his health history like different chapters in a medical textbook.

He’s had a kidney transplant and open-heart surgery. He has diabetes and battled pancreatitis. And he’s a recovering alcoholic and addict with over 30 years of sobriety.

“I could have given up,” Mark said. “I could be gone right now. But I’m a little stubborn.”

It’s a trait that serves him well as he faces his latest health challenge. Mark has been a patient at the Methodist Hospital Amputee and Gait Rehabilitation program for the past six months after having his left foot and part of his lower left leg amputated last fall. He looks forward to the twice-weekly appointments because with each visit, he moves that much closer to the active lifestyle he wants.

“I’m the eternal optimist,” he said. “I tell people who get down, ‘Just remember one thing. There’s somebody who had plans today that isn’t going to make it. Or they didn’t make it through the night. You have no right to feel down or upset about where you’re at. Get off your butt and do something about it.’”

A Unique Program Tailored to Each Patient

Among Mark’s health challenges were ulcers that led to infections in the bones of his foot. Over time, those bones fused together and became brittle. The issues came to a head as he was admitted to Methodist Hospital with sepsis in late September. Mark recovered, but his foot couldn’t be saved.

On Oct. 1, he was transferred to hospital’s Methodist Acute Rehabilitation Center, which is certified as an Amputation Specialty Program by the Commission on Accreditation of Rehabilitation Facilities (CARF). There he continued his healing and devoted his time to physical therapy and occupational therapy as he adjusted to his circumstances.

“You don’t think much of it, but something like taking a shower, now it’s much different,” he said. “Making a bed, opening doors, you name it. They were teaching you the littlest things.”

After nearly two more weeks, Mark was discharged and graduated to the Amputee and Gait Rehabilitation program.

“Our goal is to get people using their new prostheses and feeling comfortable walking and moving around,” Curran said. “For people like Mark, their goals are hiking and walking dogs – high-level function. Other people simply want to stand up and pivot transfer into a wheelchair. It depends what a person’s goals are, and we gear the program toward them.”

For many patients, the work begins before they even have a prosthesis. Curran said pre-prosthetic strength exercises and stretches help patients “hit the ground running” when they do get their prosthesis.

Mark said he felt uncertain about his future when he began working with Curran and Seeley. He was in a wheelchair and learning to use a preparatory prosthesis, but still more than three weeks away from getting a custom-made prosthesis. Whatever he was feeling didn’t show. Instead, the therapists saw an element that’s crucial to success in the program.

“Take It and Run With It”

Mark’s appointments are filled with a variety of exercises aimed at improving his gait and balance – which was first affected by his foot issues and amplified after amputation.

During a recent visit, Mark and Curran began by discussing the fit and comfort of his prosthesis, and she examined a minor wound where his leg meets his prosthesis. Then they moved on to a range of exercises that included moving through an agility ladder, navigating a series of low hurdles and passing a soccer ball.

“Our main goal is to get their weight shifted back to that prosthetic side,” Curran said. “Sometimes it can be years of habits, putting weight on the other side. Most of the activities are designed to address that. We want to build habits and encourage equal use of both legs.”

The therapists also want patients to keep working when they leave the clinic.

“I think the best part is when people are motivated and take what they’re doing in the clinic and practice it at home,” Curran said. “When they come back, you can see they’ve been practicing and applying it to their everyday lives. That’s what matters at the end of the day, that their function and independence are improving. We don’t want to see somebody forever. We want to see them take it and run with it.” 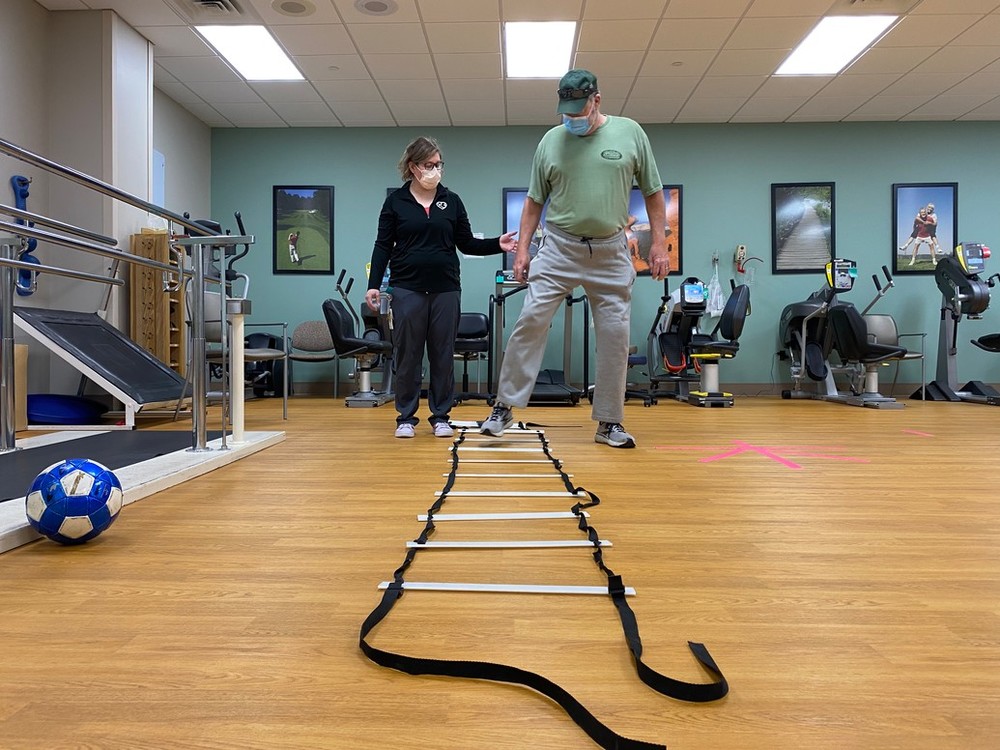 Mark is doing his best to press ahead outside of the clinic. He tries to walk at least two miles a day with his goldendoodles and challenges himself with hilly terrain. And he has another goal in mind.

“I’m at the point where I’m just starting to swing a golf club,” he said. “I hope to go to a driving range in the next month or two and hit some balls. At some point this summer, I want to play golf. I think I’m fairly close.”

After seeing Mark’s attitude and progress since January, Curran agrees that he’s ready to start small. And she’s not ruling out playing a course as his balance improves.

“Knowing Mark, I don’t know that he’d be happy just swinging the club,” she said. “He’ll probably want to have some oomph behind it. He’d kind of a competitive guy.”

Being competitive, motivated and positive has served Mark well, he said, but the Amputee and Gait Rehabilitation program gives patients the tools they need to improve mobility and regain independence.

“I don’t care if you’ve got a lost limb, have problems with balance, whatever. I would recommend it highly,” he said. “I believe, if nothing else, the people there care, and they’ll do everything within their power to help you get better. And that’s all you can ask for.”