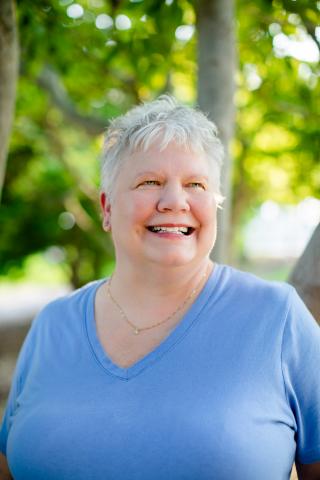 That’s the best way Sandy Krupka can describe what she felt in 2013 after learning she was harboring two massive tumors in her pelvis – one the size of a cantaloupe, and the other a small watermelon.

“I was basically carrying a child, and I had no idea,” she said. “It’s not like I was really overweight, so how is that even possible – to not have any clue?”

Her diagnosis? Stage 3B ovarian cancer.

“That means it’s not generally curable,” said Niyati Nadkarni, MD, Sandy’s gynecologic oncologist at Methodist Estabrook Cancer Center. “At that stage, we can get people into what we call remission, which is where the disease isn’t active. But more than likely, it’s going to return at some point.”

And it did return.

But thanks to Harper’s Hope – a cancer survivorship program made possible by generous support of Methodist Hospital Foundation – Sandy’s journey included confidence, comfort, strength and healing.

She received counseling and behavioral health support. She turned to the Methodist Inner Beauty Salon for her first two wigs. She also received nutrition support, lymphedema therapy and genetic testing – all through Harper’s Hope.

She became eligible for a clinical trial after her third diagnosis in 2019. Her course of treatment has since changed, but she’s determined to keep fighting.

“I think it takes a special person to survive cancer time and time again and continue moving forward,” she said. “I refuse to let it define who I am. While my appearance gives it away – that yes, I have cancer – I’m more than that. I’m a fighter. I’m not a statistic. I’m a role model for my kids and others – to never give up.”